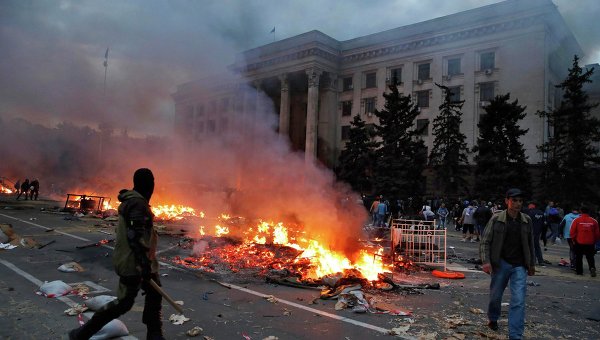 On May 2, 2014, at least 48 anti-fascists and trade unionists were killed when neo-Nazis attacked a protest encampment in Odessa, Ukraine, and set fire to the nearby House of Trade Unions. Hundreds of survivors were injured. Many of the victims were forced to flee the country. Others were arrested and put on trial, while the perpetrators walked free.
Since then, the U.S.-backed government in Kiev, which helped unleash the attack against its political opponents in Odessa, has blocked every attempt to investigate the crime and prosecute those responsible.

Now, as the second anniversary of the tragic event approaches, both sides are squaring up for a new confrontation. Family members and friends of the murdered activists, led by the Mothers Committee for May 2, are determined to hold a memorial event on the Kulikovo Field, where their loved ones died. International delegations from several countries plan to monitor and support the event, including deputies of the European Parliament and activists from the U.S.-based United National Antiwar Coalition (UNAC). Neo-Nazi groups like Right Sector, Svoboda, Automaidan and Maidan Self-Defense, who routinely and violently attack weekly and monthly commemorations, have threatened the organizers and vowed to prevent the memorial from taking place. Behind them, the Ukrainian government headed by President Petro Poroshenko and Odessa Regional Governor Mikhael Saakashvili – a U.S. stooge and former president of the republic of Georgia on the run from corruption and war crimes charges in his own country – are mobilizing police and the fascist-dominated National Guard from all over Ukraine to “maintain order” in Odessa. (Timer-Odessa.net, April 19)

Odessa is one of the “Hero Cities” of the former Soviet Union, honored with that title for the part its residents played in resistance to Nazi occupation during World War II.

Hitler’s modern-day successors have a special hatred for this city, Ukraine’s third largest, located on the Black Sea. Like many major seaports, Odessa has long been a diverse, inclusive and multinational city, all of which was reinforced through decades of socialist development while Ukraine was part of the Soviet Union.

It’s no surprise, then, that the fascist and white-supremacist forces behind Ukraine’s 2014 coup single out Odessa’s residents for abuse.

And yet, the people of this Hero City keep resisting.

On January 28, when the Security Services of Ukraine (SBU, the Ukrainian FBI) and neo-Nazis targeted a housing complex where many Vietnamese migrants live, busting down residents’ doors and robbing their savings, people fought back and chased the armed goons out into the street. Some youths even tried to commandeer their vehicles! (Timer-Odessa.net)

The raid was also denounced by the Foreign Ministry of the Socialist Republic of Vietnam.

On April 10, hundreds of Odessa residents, including many elderly veterans of World War II, came out to commemorate the anniversary of the city’s 1944 liberation from fascism by the Red Army and local partisans. Although they were viciously attacked by the neo-Nazis, the people fought back, chanting, “Banderites, get out of Odessa! Fascism will not pass!” (Solidarity with Antifacist Resistance in Ukraine, April 11) “Banderite” refers to Stepan Bandera, a Nazi collaborator and icon of right-wing Ukrainian nationalists.Today, the city is plastered with posters, surreptitiously pasted up at night, urging people to come out to the memorial on May 2.“The neo-Nazis attack seniors and children. They are able to attack from behind or in a crowd,” noted Alexey Albu, former Odessa Regional Deputy and survivor of the May 2 massacre, after an assault on family members in March. “But the situation will change. The Ukrainian government, which protects the ultra-nationalists, is bursting at the seams. After its overthrow, those responsible will be identified and punished.” (Fort Russ, March 27).

Responding to an appeal from the Mothers Committee for May 2, the United National Antiwar Coalition is organizing a delegation of U.S.-based anti-war and human rights activists to go to Odessa and join other international groups monitoring the memorial May 2.

UNAC is also appealing to people to contact their elected officials, along with local and national media, and demand they pay attention to what is happening in Odessa.

A statement issued by UNAC, supporting the memorial and calling for a United Nations investigation of the 2014 events, reads in part:

“On May 2, 2016, a memorial will be held in Odessa, Ukraine, to honor the memory of scores of pro-democracy activists who were brutally murdered on that date in Odessa two years ago.

“There is no reason for the city authorities to forbid a peaceful memorial, but right-wing radicals – some of whom are believed to have been involved in the events of 2014 – have declared that they will not allow it to proceed.

“The tragedy of Odessa and the continuing danger of right-wing violence in that beautiful city is of growing concern to decent-minded people around the world.

“Therefore, we call on the governments of Odessa, Ukraine and the United States to ensure that the civic rights of those attending the May 2 memorial in Odessa will be respected, including the delegations of international monitors who will be present on that day.

“We further respectfully appeal to the United Nations Human Rights Committee to initiate an international investigation into the events of May 2, 2014, as requested by family members, friends and supporters of those who died on that day.”