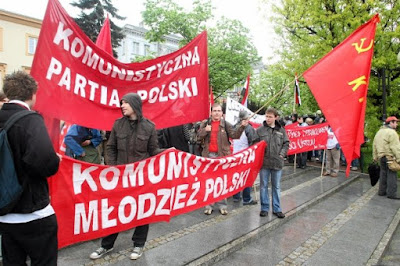 Communist Party of Poland (KPP) - Appeal for International Solidarity.
Four activists of the CPP were condemned on 31st of March 2016 by the Regional Court in Dąbrowa Górnicza for propagating communist ideology in the „Brzask” newspaper and on the party's website. They have been sentenced to 9 months of limited freedom with compulsory gratuitous social work and fines.
This provocative verdict was taken during the summary procedure without presence of all the sides, that is usually used in offences, when guilt of the accused is certain. The court did not even undertake standard judgement procedure and based its verdict only on a charge. The accused even had no possibility to defend themselves. The condemned had already made objections to a judgement demanding normal court proceedings.


Activists of the CPP were accused of breaching article 256§1 of the penal code: „Whoever publicly promotes a fascist or other totalitarian system of state or incites hatred based on national, ethnic, race or religious differences or for reason of lack of any religious denomination shall be subject to a fine, the penalty of restriction of liberty or the penalty of deprivation of liberty for up to 2 years”.
An earlier attempt to amend this article by adding a ban on communist symbols was met with protests both in Poland and abroad. On 19th of July 2011 it was lifted by the Constitutional Court that proclaimed it contradictory with the principle of freedom of speech.
Accusations against activists of the CPP for promoting a totalitarian system are the next example of equating communism with fascism and banning communist activity.
The case was started by a denunciation made by Bartosz Kownacki - MP of the Law and Justice (PiS) party in 2013. The prosecutor refused to proceed. However in 2015 proceedings were resumed and gathered pace after the elections won by PiS. On 31st of December 2015 Regional Prosecutor's office in Katowice issued the case to the Regional Court in Dąbrowa Górnicza. The act of accusation stated that activists were publicly promoting a totalitarian system, by publishing in “Brzask” newspaper articles “directly related with the communist system and Marxism-Leninism, which in the context of historical experience is contradictory with democratic values” - that means for the activities of a legal political party.
The case is also important in the context of the politicisation of the prosecutor's office by subordinating it to the Minister of Justice – Zbigniew Ziobro from PiS, who was nominated as the Prosecutor General. The justice system is openly treating right wing extremism differently. At the same time when members of the “Brzask” editorial staff are being sentenced, neofascists from ONR (National Radical Camp) freely demonstrated on the streets of Białystok commemorating the 82nd anniversary of their organisation. During the demonstration under the phalanx symbol they carried torches and promised to “do away” with political enemies, so directly referring to fascism. Despite this, the Ministry of Defence plans to arm neofascists as part of the territorial defence. Earlier, the court in Częstochowa acquitted charges against a man selling racist t-shirts, not seeing any violation of the art. 256 of the  penal code. Recently the Minister of Justice and Prosecutor General has suspended a sentence of a nationalist sentenced for assaulting a policeman.
The verdict condemning Polish communists was taken at the same time when on the 1st of April the Parliament voted through a law “on banning the promotion of communism” that forces local authorities to change the names of streets and other objects that are associated with communism, which is an attack against the tradition of the workers' movement. The Institute of National Remembrance creates a registry and demands from the local authorities liquidation of the monuments of Soviet soldiers and others related to communism. The Devastation and liquidation of monuments and falsifying of history are common features of fascist practices.
The government and bourgeois class are fooling themselves if they believe that the CP of Poland, the communists of Poland will be intimidated by this anti-communist persecution or that the anti-communist campaign will make them yield. The measures against the communists go hand in hand with the escalation of the barbaric anti-people political line of the government and EU. It is very important that solidarity with the CP of Poland, which operates in difficult conditions and the support for the persecuted communists, is expressed in a mass and resolute way at this time. With protests at the embassies of Poland in every country, with solidarity motions etc.
Hands off the CP of Poland. The anti-communist persecution must be rescinded, the unacceptable anti-communist laws must be abolished. Anticommunism and the rewriting of history will not succeed.