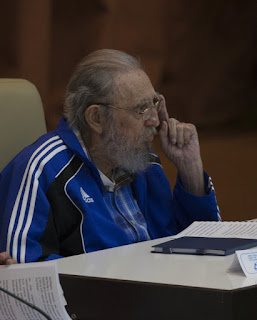 However, he warned that the greatest danger now hovering over Earth derives from the destructive power of modern weaponry, because it could undermine peace in the world and make it impossible for human life on the surface of the earth to exist.
Future generations will know -he reflected- much more than us, but first they will have to solve a big problem: how to feed the billions of human beings whose realities collide against the limits of the natural resources they need.
“Let’s hope many humans worry about these realities and don’t continue like in the times of Adam and Eve, eating forbidden apples,” he commented, and expressed his concern about who will feed people without technology, or rain, or reservoirs or underground deposits. We must constantly insist on these issues, he stressed.
The historic leader of the Revolution recalled that soon he will turn 90 and that “everyone will eventually die, but the ideas of Cuban communists will prevail, as proof that on this planet, if you work with fervor and dignity, the material and cultural goods that humans need can be produced, and we must fight relentlessly to obtain them. ”
“We will set out and will improve what should be improved, with utmost loyalty and united force, like Marti, Maceo and Gomez, in unstoppable march,” he concluded.