Sweden has been following a foreign policy of neutrality for a long time. However, the ongoing imperialist war in Ukraine has caused a rise in Russophobia, thus giving the opportunity to the Swedish bourgeoisie to root for NATO membership.
Swedish daily Aftonbladet reported that the United States and Britain had promised Sweden increased military presence, more in-depth military exercises and 'strong political' support from NATO countries" during a possible NATO application process. It is expected that the Swedish government will formally express its wish to join the imperialist alliance by mid-May.
According to a recent Poll (Demoskop/Aftonbladet), 57% of Swedes favor NATO membership, while 21% opposes it. Given the record of NATO as an imperialist war machine, with countless of interventions throughout the world, the majority's support towards Sweden's accession to the alliance is certainly an interesting fact.

In an exclusive statement to In Defense of Communism, the General Secretary of the CC of the Communist Party of Sweden (SKP), Andreas Sörensen, points out:

“The bourgeoisie of Sweden has been working very hard to achieve this result and they have not hesitated to use the imperialist invasion of Ukraine as a pretext.

In short, they have managed to swing public opinion on the matter for the last couple of years, beginning well before the invasion. There has always been a certain antagonism against Russia among the Swedish bourgeoisie, which is being utilized now, as it was during the Cold War as well, albeit not against Russia, but the Soviet Union.

They have done this through a closer military and political cooperation with NATO and the NATO countries, clearing the path for an acceptance of the idea of working with the US and the other NATO countries. At the same time, all major media outlets have been relentless in spreading myths about how Swedish security is dependent on a membership.

This is a process that has been ongoing for quite some time and it is not something new. With the invasion, we are seeing a severe escalation of the propaganda, and the preparation of the formal membership as well.”

Concerning the role of Swedish social democracy and how it affects the people's stance towards NATO, Andreas Sörensen says:

“The stance of Swedish social democracy is crucial. In contrast to other countries, social democracy has not yet been eradicated in Sweden and still plays a vital part in the maintaining of Swedish capitalism. Social democracy still controls the labor movement in general and the labor unions in particular, thus controlling any workers’ opposition. This means that they still have a hold on big sectors of the working class, who still follow the social democratic party. Their support is thus important.
It is also important to note that they do allow opposition within their party. High-ranking politicians have expressed their doubts as to the speed of the process, as well as to the membership application in its entirety. However, the outcome is certain, despite these concerns. This opens the door for ordinary workers to continue supporting the party as such, despite not agreeing with its line on NATO, transforming these voices into an objective support for the party line. In this way, critical voices are transformed into objective support." 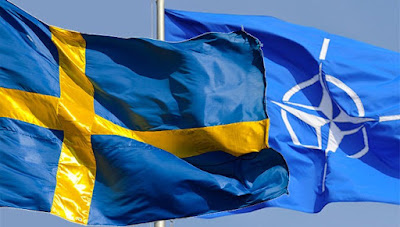 Contrary to social democrats and the bourgeois political forces, the Communist Party of Sweden opposes the membership of Sweden in NATO and works as best as it can to prevent it from happening. Here is what Secretary Sörensen stresses out to In Defense of Communism:

The possible membership of Sweden in this alliance is a reflection of the strengthening of Swedish capitalism vis-à-vis its competitors – there is a need for the Swedish bourgeoisie to defend its investments abroad, and to secure its trade routes. A Swedish membership would thus entail an increased usage of Swedish soldiers and weapons in the struggle of the Swedish bourgeoisie against its competitors and for the common interests of the NATO-EU-USA imperialist bloc.

In short, the Swedish bourgeoisie is ready to take the next qualitative step in its struggle against its competitors. We oppose this and we refuse to be part of a military alliance aimed at the suppression and exploitation of working people all over the world, and we refuse to accept the strengthening of our own bourgeoisie in its struggle for market shares and investments; we oppose the system as such and as communists, we can never choose sides in the struggle between bandits.”