Greece: Trade unionists, KKE cadres arrested by police because they protested against NATO! 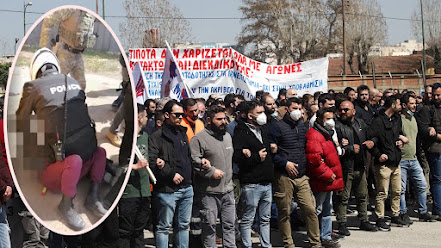 On Wednesday 6th April, Greek riot police forces launched an unprovoked attack against workers and students in the port of Thessaloniki, during a large strike rally that was held in the country's second largest city.

The demonstrators tried to approach the port's gate in order to protest for the presence of a NATO ship that transfers military equipment towards Eastern Europe.
On the orders of the government, police not only blocked the port's gates but fired tear gas and proceeded to the completely unjustifiable arrest of 8 protesters, including two members of the Central Committee of the Communist Party of Greece (KKE), a journalist from “Rizospastis” newspaper and trade unionists. Due to the excessive violence of the police, one of the arrested was injured during his detention.

The “crime” of the comrades who were arrested was that they approached British military vehicles, which were stationed in the Port, threw red paint and wrote the slogan “NATO Go Home” on them. In fact, Greek riot police were deployed by the government in order to protect the imperialists of NATO from Greek protesters who wanted to express their strong opposition for the country's participation in the dangerous USA-NATO-EU plans!

Photos and videos published by 902 portal and other sources prove the violent and unprovoked character of the attack for which the conservative government of New Democracy (ND), under Prime Minister Mitsotakis, bears huge responsibility.

The barbaric attack of police forces against protesters in Thessaloniki was condemned by the All-Workers Militant Front (PAME), the Journalists' Union of Macedonia and Thrace Daily Newspapers as well as others. 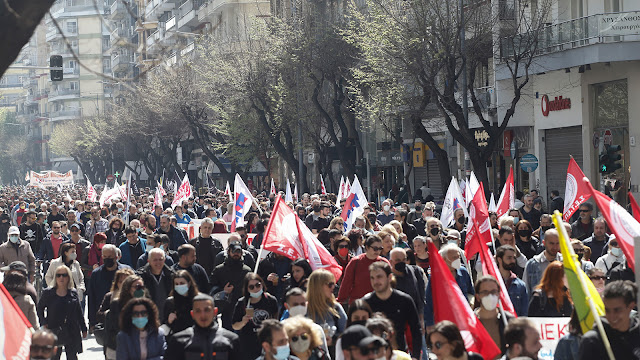 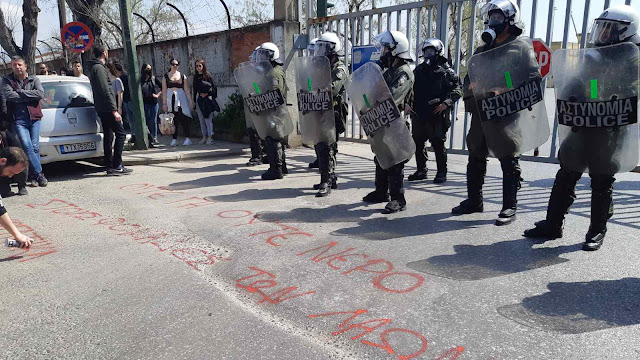 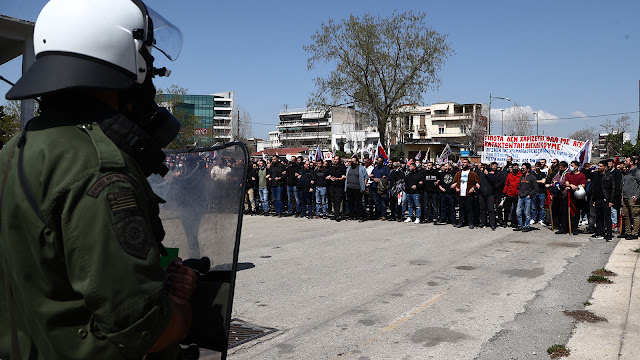 In a statement issued later on Wednesday, the Press Office of the CC of the Communist Party of Greece (KKE) stresses out:

“The KKE denounces the unprovoked and violent attack of police forces against the strike mobilization in the port of Thessaloniki, where a NATO ship transferring  military equipment to Eastern Europe, has called.

The government's intention to pass “through fire and steel” the policy of the escalating country's involvement in the dangerous imperialist plans of NATO-USA-EU, by suppressing the just mobilizations, must face the wide popular condemnation.

The KKE demands from the government, which bears full responsibility for these unacceptable incidents, to release the detainees immediately, a request which was expressed by the Party's parliamentary representative Thanasis Pafilis to the Deputy Minister of Citizen's Protection L. Economou and the Minister of Maritime Affairs G. Plakiotakis”.

Protests for the release of the 8 detainees were organized on Wednesday evening both in Thessaloniki's Police Headquarters, as well as in the Ministry of Citizens' Protection in Athens.

It must be noted that the April 6th National General Strike was successful, with numerous rallies throughout Greece in which thousands of working men and women expressed their demands including:

Against any involvement-participation of the country in the imperialist war! Against inflation and taxation, for the defense of the working class income!  For collective agreements with substantial increases in salaries.

Today, 7th of April, under the pressure of the workers’–people’s movement, the 8 militants were released, while the prosecutor set the trial date for 15 June. The 8 militants are charged with disobedience, release of a prisoner, damage to foreign property, and violence against officials. The provocative charges that were pressed against them yesterday  concerning the violation of the law on weapons and flares, as well as the use of weapons, were refuted this morning as they were blatantly trumped-up.