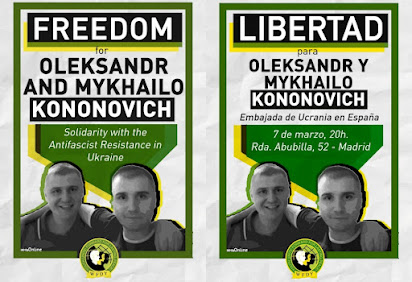 Mikhail and Aleksander Kononovich, both members of the Leninist Communist Youth Union of Ukraine are still alive, according to updated information given by the World Federation of Democratic Youth (WFDY).

More specifically, a recent post by the WFDY reads:

"Finally, after 6 days without any news, we have received an update on the situation of comrades Kononovich.

-They are arrested in a pre-trial detention centre in Kiev.

-They have been beaten badly many times.

-They still are alive.

Let’s continue struggling for their freedom".

Kononovich brothers were arrested by the Ukrainian authorities on March 7th, being accused of being Russian and Belarusian spies.
Since then, numerous Communist Parties and Youth organizations from all over the world have demanded their immediate release.
With a question submitted to the High Representative of the EU for Foreign Affairs Josep Borrell, the European Parliament Group of the  Communist Party of Greece (KKE) denounces the arrest of the two members of the Leninist Communist Youth Union of Ukraine and demands from the EU Commission to express its position on the issue of anti-communist persecutions in the country.
We urge all comrades, all readers, to address their local Ukrainian Embassies/Consulates demanding the immediate liberation of Kononovich brothers.