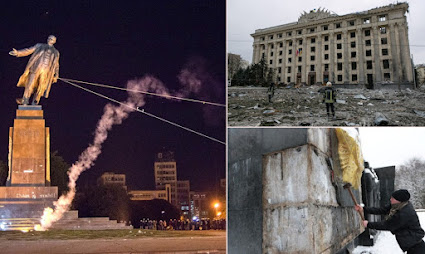 The destruction of the cultural heritage in Ukraine and other countries, as a consequence of the imperialist war, is the subject of a written question submitted to the European Commission by the EU Parliament Group of the Communist Party of Greece (KKE).

A recent example is the Russian bombing of Freedom Square and the Palace of Labor in Kharkiv, which are soviet-built structures that are heritage sites of international significance.

The destruction of historical monuments is not a new development. As 902 portal reports, following the 2014 coup with the open intervention of the USA, EU, NATO and the support of fascist gangs, the Ukrainian government passed laws that allowed the destruction of monuments within the context of the so-called “decommunization”. Such cases are the statues of Lenin in Kiev and Kharkiv which were vandalized by fascist groups and Azov members in 2014.

Subsequently, the Law 2540 signed by Poroshenko government on May 15th 2015, set a six-month deadline for the removal of other communist monuments. By 2016, 1,320 monuments dedicated to Lenin and 1,069 other significant memorials were either removed or vandalized.

The ongoing anti-Russian hysteria fueled by US-NATO propaganda led to the unacceptable and unhistorical targeting of Yuri Gagarin's bust in Mondorf-les-Bains, Luxembourg as well as of Ernst Thälmann's monument in Berlin.

Based on the above, the Communist Party MEP Lefteris Nikolaou-Alavanos submitted to the EU Commission the following question:

“How does the Commission view the fact that the incalculable and enormous destruction of historic cultural monuments, which are a historical heritage of the people, began by the – supported by the EU, US and NATO – Ukrainian governments following the 2014 coup and continue to this day, after the condemnable Russian invasion, in the context of the anti-communist campaign by both camps of the imperialist conflict?”