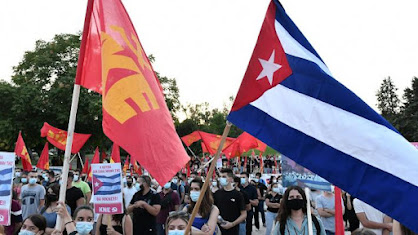 In a statement, the Communist Party of Greece (KKE) denounces the joint statement against Cuba signed by Foreign Ministers, including that of Greece.

Specifically, the Press Office of the CC of the KKE issued the following statement:

“The KKE denounces the despicable joint statement supporting the criminal plans of US imperialism against Cuba, signed by 21 Foreign Ministers, including the Greek Foreign Minister, N. Dendias. The joint statement, co-signed by the US Secretary of State, as well as the Foreign Ministers of a bloc of reactionary governments, such as of Israel, Brazil, Austria, Poland, Ukraine, the Baltic states, etc., adopts all the provocative pretexts of the Biden administration’s intervention plan against the people and the government of Cuba.
It is a severe provocation for the ND government to express hypocritical concerns about the ‘human rights’, ‘freedoms’ and ‘living conditions’ of the Cuban people, at the same time that it is promoting anti-labour laws in Greece, is striking a blow against the workers’ wages and rights, bears criminal responsibilities for the spread of the pandemic and intensifies repression to the detriment of the workers’–people's movement. This signature, for which it assumes heavy responsibilities, intervenes directly in the internal affairs of an independent state and entangles our country in very dangerous scenarios and plans, which is why it needs to be massively rejected and condemned by the Greek people.

The KKE expresses its full solidarity with the Cuban people and the Cuban government, who are not alone in facing the dangerous plans that are being hatched against them.”