Under the proposals, citizens will be able to change their name and gender without the need for proof or witnesses. The administrative procedure will also do away with health reports and the need for medical and legal guardianship.
Various leftist media, both in Spain as well as abroad, have hailed the draft law as a progressive measure which will improve rights for transgender citizens in the country. But what is the reality?

In a statement, published in June 29th, the Political Bureau of the Communist Party of the Workers' of Spain (PCTE) blasts the "propaganda and political opportunism" of PSOE-UP coalition government and explains why the draft law is "a setback in the rights" of working women and the working class in general.

"The Council of Ministers has approved the latest "draft law for the effective equality of trans people and LGTBI equality", better known as the "Trans Law". It does so coinciding with the week of LGBT Pride, in the umpteenth example of propaganda and political opportunism of the PSOE-UP coalition government.

The “Trans Law” has sparked a growing debate, encouraged by the mainstream media, which has been greatly distorted. The law captained by the Ministry of Equality of Irene Montero has benefited from this confusion, which has tended to present it as an advance in social rights in pursuit of supposed diversity. Nothing is further from reality. The "Trans Law" represents a serious risk for the struggle of women, and also of homosexual people.

The key to the law is the so-called “gender self-determination”. The draft Law includes the following: “the exercise of the right to the registration rectification of the mention related to sex in no case may be conditioned to the prior presentation of a medical or psychological report regarding the disagreement with the sex mentioned in the registration of birth, or the prior modification of the person's appearance or bodily function through medical, surgical or other procedures ”. In other words, the possibility of self-assigning the sex of each one for legal purposes is approved.

Objective reality should not be confused with subjective self-perception. Biological sex is an objective fact. And with the substitution of "sex" for "gender" gender roles are perpetuated. The present and past societies have been establishing, for millennia, a whole series of considerations, behaviors, roles and divisions of work that supposedly would be linked to sex to define what would be a “good woman” and a “good man”. This social construction has had, and continues to have, an oppressive character, especially for women and above all for working women. They have also suffered hardships and discrimination throughout history all those men and women who have not adapted to the roles that had been socially assigned to them, and above all homosexuals.

Confusing sex with gender, to end up dictating the self-determination of sex, denies the material basis of the oppression suffered by working women. If this oppression is no longer due to the destructive consequences of the system, but is simply an individual choice, capitalism is exonerated from any responsibility.

Individualism advances by leaps and bounds. The denial of the concepts of men and women is sought and the consequence can be to destroy all policies for the protection of women and make the struggles of working women even more difficult.

In a particularly serious way, a de facto denial of violence and structural discrimination suffered by women within the capitalist system is promoted. In the same way, the “Trans Law” supposes in practice a denial of the different sexual orientations, which results in homosexuality, since everything is determined by gender, in a certain way ceases to be taken into consideration or even to exist.

Another aspect of special and sensitive importance is that which has to do with the risks posed for minors in their psycho-affective development, since from the age of 14 they will be able to "freely" change their sex legally without any clinical report, therefore without professional advice for a process that can lead to irreversible physical change. 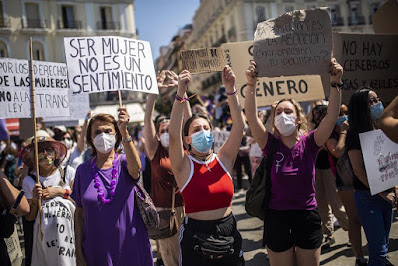 The “Trans Law” does not take into consideration the material reality of the so-called “trans people”, without making a single mention or collecting any progress regarding the specific difficulties that take place among these people due to belonging to one social class or another. .

The "Trans Law" that the PSOE-UP coalition government plans to process also opens the field to the development and consolidation of new submission frameworks and market niches, through the commercialization of sexual and reproductive exploitation. For this reason, the bourgeoisie and its governments need to change the legal considerations of concepts such as "woman" and "mother". Thus, an international offensive is opened against working women, who will be the ones who have to sell their bodies in the new markets of sexual and reproductive exploitation.

The rejection of the draft law is in no way at odds with the fight against any discrimination suffered by the working class on grounds of sex or sexual orientation. On the contrary, it is the "Trans Law" that has erased the struggles of women and homosexual people throughout the last century.

It is necessary to organize a women's movement that is at the forefront of the class struggle, defending its conquests against any setback, both political and ideological, in the struggle for their emancipation.

May no discrimination divide our class!"
IN DEFENSE OF COMMUNISM ©