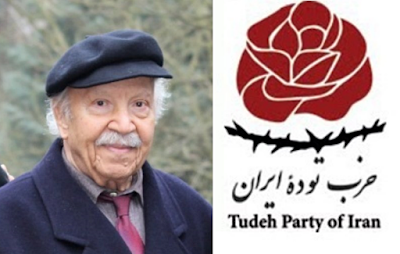 Comrade Khavari was a tireless fighter who, during his nearly 80 years of campaigning for the rights of the workers and working people of Iran- and despite years of imprisonment and torture by the Shah’s regime; long years of exile from Iran; the many propaganda campaigns against him and theParty;and ill-health in the last several years of his life- never gave up his duty as a Party soldier. Comrade Khavari played a clear and special role in the continuation of the activities and struggle of the Tudeh Party of Iran during one of the most difficult and critical periods in its history.

Comrade Khavari inspired generations of communists and freedom fighters. He was characterised as“the voice of our Party's righteousness”and described as “one of the spiritual assets of our militant proletariat”and someone whom “no wall could separate from the people he loves so much.”

Comrade Khavari was born in Mashhad, Iran, on March 22, 1923.  He was attracted to communist ideas in his early youth. As he told Nameh Mardom (the central organ of the Party) last year, “At the birth of the Party, I was a young man deeply influenced by progressive ideas and I was active in Mashhad...”

Comrade Khavari was forced into a long exile just before the CIA-orchestrated coup d’état of 1953 in Iran. During those years of exile, he was tasked by the Party’s leadership to go to Beijing University in China to teach Farsi and begin a Farsi-language radio station to function as the voice of the Party and working people of Iran. [Several years later,] after returning from China and by the decision of the Party's leadership at the time, Comrade Khavari was sent to Iran, along with several other comrades, to organise the underground struggle inside the country. It was during this mission that he and his comrades were arrested, imprisoned, and tortured by the operatives of the Shah’s regime. Comrade Khavari was subsequently sentenced to death by the Shah's military courts. In his historic courtroom defence, he remained solidly loyal to his progressive ideals…The ideals of national prosperity, socialism, patriotism and internationalism, and the rights of the working people of Iran.

While serving prison time, Comrade Khavari was appointed in absentia to the Central Committee of the Tudeh Party of Iran. Comrade Khavari was a symbol of resistance, compassion, and courage in prison, and was therefore respected by political prisoners from across the ideological spectrum.

After spending 15 years in the prisons of the Shah's regime,Comrade Khavari was released from Qasr prison, along with the last group of political prisoners, on the eve of the February 1979 Revolution. At the request of the Party's leadership, he began organising the Party's office in Tehran and publishing the first issue of “Nameh Mardom”, the central organ of the Party.

In the wake of the Revolution, Comrade Khavari was elected to the political bureau and served as a member of the Secretariat of the Central Committee of the Tudeh Party of Iran.

In the early-1980s, he was assigned the mission to go to the office of the Peace and Socialism magazine in Prague. Relatively shortly after his departure from Iran, the criminal theocratic regime there arrested thousands of members, leaders, cadres, and sympathisers of the Party in a coordinated massive attack on the Party in February 1983 and then in May 1983.

The horrendous spectre of television shows featuring the forced confessions of torture victims, and the announcement of the Party’s dissolution in these shows, created an unprecedented difficulty for the Party's survival and continued activity. Comrade Khavari, as the only surviving Secretary of the Party's Central Committee, along with a small number of leading comrades who had survived the attacks, took on the historic responsibility of rebuilding and restoring the Party's leadership and organisation; reviewing and reassessing the Party’s policies from the first years after the Revolution;and continuing the vital fight against the ruling dictatorship, and the global struggle for the release of political prisoners in Iran. Comrade Khavari led this heroic effort, first as the Head of the Party's Extraterritorial Committee and then, following the successful holding of the 18th Plenary of the Party's Central Committee, as the first Secretary of the Central Committee of the Tudeh Party of Iran.

Comrade Khavari was a principled and prominent leader of the Party who had a significant role in the survival of the Party during those harsh years - and particularly after the collapse of the Soviet Union and other socialist states in the late-1980s and early-1990s, which challenged the theoretical foundations of our Party and as well as the workers and communist movements around the world.

In the Central Committee's plenary in April 1990, on Comrade Khavari's suggestion, the slogan "Rejection of the Theocratic Regime" was accepted as the Party's key slogan. Soon afterwards, the Party was able to successfully hold its 3rd Congress - for the first time in 47 years [owing to the constant waves of repression it had faced].  The process of rebuilding the Party and holding the 4th,5th, and 6th Congresses, as well as preparing for the 7thCongress, are just part of the brilliant record of the Tudeh comrades during the difficult period of second migration and exile- none of which would have been possible without the active presence and influential leadership of Comrade Khavari.

Comrade Khavari was a smart militant, revolutionary thinker, and a dignified human being who, along with his comrades, at one of the most critical junctures in our Party's contemporary history, was able to uphold the principled policy and Marxist-Leninist theoretical foundations of the Tudeh Party of Iran and keep aloft the banner of the struggle of our proud working-class Party. A knowledgeable and dedicated fighter, he had endless optimism about the future of our homeland and the struggle of the working class.

Comrade Khavari left his comrades, and his beloved compatriots and nation, on Friday March 19, 2021, due to cardiac arrest.  However, his pure, human, and resolute beliefs on the righteousness of the historic struggle of the workers and working people of Iran and the world, and the necessity of the Tudeh Party of Iran's struggle for freedom, independence, peace, social justice, and socialism, are an invaluable and ever-lasting spiritual inheritance that the Tudeh militants will cherish in their struggle until the final victory.

On the passing of Comrade Ali Khavari, the Leader of the Tudeh Party of Iran, the Party's “voice of righteousness”, a tireless fighter, and the “spiritual asset” of the workers and working people of Iran, the Central Committee of the Tudeh Party of Iran expresses its condolences to his family, all members and supporters of the party, and all true fighters of the working class and working people rights.

May his memory be cherished and endure forever!

The Central Committee of the Tudeh Party of Iran
21 March 2021. 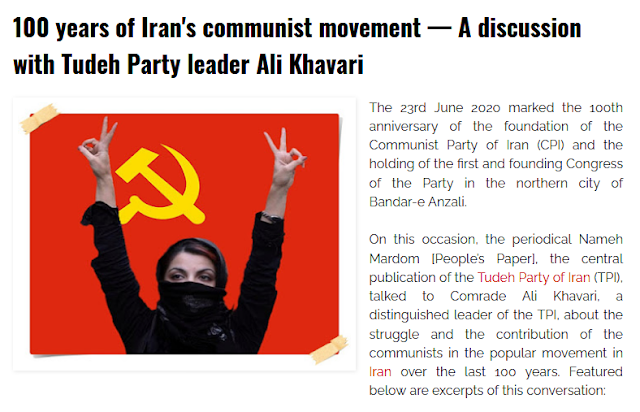