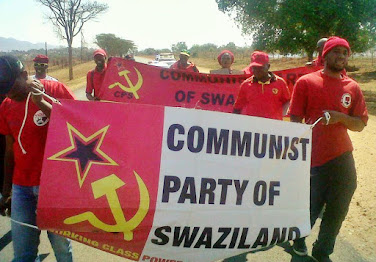 The CPS Central Committee has taken all reasonable measures to ensure the prevention of Covid-19 transmission, and will thus also adhere to regulations meant to limit such transmission.

Messages may be sent to the email cpswa.org@gmail.com.

The people of Swaziland still live under absolute monarchy rule, imposed by decree on 12 April 1973. The decree abolished political parties and activities, bestowed all executive, legislative and judicial powers upon the monarchy, an institution which would rule by decree from time to time. The 2005 constitution merely reaffirmed and deepened the monarchy’s absolute rule, and in the process worsened the situation of the people.

The results of absolute monarchy rule over the decades include deepening poverty, unemployment and widening inequality. Close to 70 percent of the people of Swaziland live below the poverty line. Both the education and healthcare systems have been destroyed by the regime, while immense riches have been siphoned by the parasitic monarchy. These have been manifested even more since the imposition of lockdown measures as a reaction to the Covid-19 pandemic. As such, the CPS has time and again called upon the people to fight against Covid-19 without ever abandoning the fight against the autocracy.

The CPS calls for the unconditional unbanning of political parties for the country to transition to democracy. The suppression of workers and rural population must be ended by revolutionary action of the people. These will demand the unity of the oppressed people in a conscious and militant fight against capitalism and imperialism.