In a written question submitted on November 2020 the Communist Party of Greece (KKE) MEP Kostas Papadakis asked the EU Commission to provide its opinion concerning the new despicable anti-communist law of Slovakia's coalition government that characterizes the Slovakian Communist Party as a “criminal and reprehensible organization”.
In her response, the Vice President of the EU Commission Vera Jourová provocatively turns a blind eye to the anti-communist legislation of Slovakia that aims to criminalize communist ideology and the activity of the communists.
Instead of giving a firm answer to the question, the Commissioner ignores the actual question and, instead, refers to the despicable anti-communist resolution of the EU Parliament on 19 September 2019 “on the importance of European memory for the future of Europe”, which in fact equates communism with the fascist monster of nazism and fascism.

Once again, the EU shows that anti-communism is a core aspect of its official policy. The persecution of communist ideology is a necessary complement to the anti-people, anti-worker policy and becomes even more intensified in times of capitalist economic crisis. However, no matter how many anti-communist campaigns the EU and the bourgeois governments will launch, no matter how many repressive laws they will vote in order to obstruct the activity of the communists, they cannot stop the progress of history.

Below, you can read the question of KKE MEP Kostas Papadakis and the answer given by EU Commissioner Vera Jourová:

Slovakia’s right-wing coalition government has signed a new anti-communist amendment into the 1996 law on the ‘immorality and illegality of the communist system’, following its approval by the Slovak Parliament. 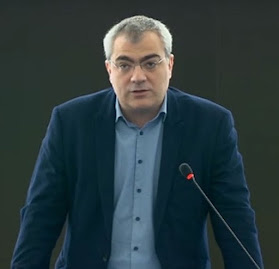 The amendment equates socialist regimes with Nazi-fascist ones, calls for the removal of monuments and street names from the socialist era and outlaws any new reference to socialist Czechoslovakia. It also refers to the Slovak Communist Party as a ‘criminal and reprehensible organisation’. Any violation of the above is punishable by law.

Workers in today’s Slovakia and across Europe know, however, that the nightmarish reality of capitalism is a far cry from the socialism experienced by the peoples of Europe.

In view of this:

1. How does the Commission view the unacceptable anti-communist law and the amendment adopted by the Slovak Parliament which prohibits communist ideology and symbols and considers Communist parties ‘criminal and reprehensible organisations’?

2. What is the Commission’s view of the EU’s official policy, as recorded in the institutions’ decisions, to legitimise and encourage such unacceptable and anti-democratic laws?
Answer given by Vice-President Vera Jourová on behalf of the European Commission

It is for the Member States to deal with the sensitive and complex issue of addressing the past.

The Commission refers the Honourable Member to its detailed response to points addressed to it in the European Parliament resolution on the importance of European remembrance for the future of Europe.

Within its competences, however, the Commission can facilitate the process of remembrance by encouraging discussion and sharing of experiences. Preserving this memory nourishes not only the commitment of the European Union to democracy and the respect of fundamental rights, but also to the fight against modern manifestations of intolerance and extremism.