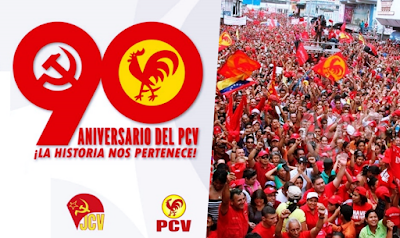 Under the slogan "History belongs to us", the Communist Party of Venezuela (PCV), the political vanguard of the Venezuelan working class, commemorated its 90th anniversary on Friday 5 March 2021.
The Party was founded in Caracas on 5 March 1931 as a clandestine organization during the repressive military dictatorship of Juan Vicente Gomez. The foundation of the PCV emerged as a historical necessity, for the organization and guidance of the working people's struggle in Venezuela.
In a period of 90 years, the Party faced numerous persecutions by the bourgeois governments, launched guerrilla war against Romulo Betancourt's administration, became outlawed, organized the workers' movement and backed Hugo Chavez's project of the “Bolivarian Revolution”.

What matters most is that all these years the Communist Party of Venezuela (PCV) maintained its marxist-leninist ideological characteristics, being a consistent anti-capitalist and anti-imperialist force.

On the occasion of the PCV's 90th anniversary, numerous Communist and Workers' Parties from all over the world sent messages of solidarity, while an online event (watch here) was organized on Friday with the participation of several foreign Communist Parties' representatives.