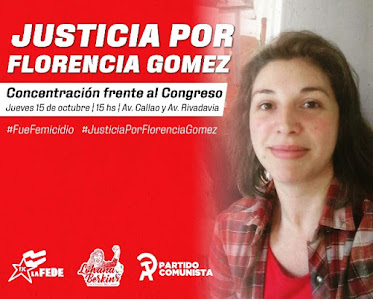 A young and politically active woman, member of the Communist Party of Argentina and staunch supporter of women's rights, María Florencia Gómez Pouillastrou was murdered last Monday in Santa Fe. The lifeless body of the 35 years-old activist was found on a rural road in the town of San Jorge with signs of head injury caused by a strong blow.

In a statement, the Communist Party of Argentina and the Communist Youth Federation announced the tragic news, expressing their firm conviction that justice will be done and the perpetrators of the crime will be punished.
A beautician by profession and mother of two little girls, María Florencia fought day by day for a better world, against the oppression imposed by patriarchy and capitalism.

"They stole a partner from the boys and girls of the Communist Party; they took a piece from the Sanjorgense feminist militancy", points out a statement by the Las Chuecas feminist organization, a founder of which was Maria Florencia.

It must be noted that femicides in Argentina reached a 10-year high under coronavirus lockdown. According a report published in Buenos Aires Times, feminist organization Mumala recorded at least 213 femicides in the country so far this year.

Condolences by the Communist Youth of Greece (KNE)

KNE also expresses its solidarity to the Communist Youth Federation and the comrades in Argentina and voices its support to the large demonstrations that are taking place in Santa Fe and throughout the country under the slogan "Justice for Florencia Gomez"!