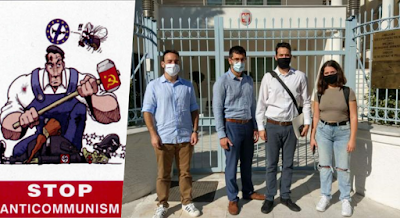 Both the CP of Poland and the editorial board of “Bzrask” have been the target of persecutions by the Polish authorities under the accusation of “publishing propaganda in favor of totalitarian regime”. The Katowice Court has announced that it will issue a decision on Tuesday 13th October 2020.
As 902 portal reports, in a meeting with the Ambassador of Poland in Greece A. Lompart, the communist MEP presented him a written statement by the KKE addressed to the Polish government, stressing that “despite the two acquittals of previous courts based on indisputable evidence, the judiciary insist on the same groundless accusations against Polish communists”.

Expressing the solidarity of the KKE and KNE towards the Communist Party of Poland, MEP Nikolaou-Alavanos underlined that the KKE demands from the country's authorities to immediately dismiss all charges and lift all prosecutions against the members and cadres of the CP of Poland and to guarantee the uninhibited participation and activity of the Communist Party in the country's social and political life.

The KKE-KNE delegation noted that the Greek communists will decisively continue their initiatives and interventions until the vindication and complete acquittal of the Polish communists.