European Communist Initiative: The pandemic reveals the criminal inadequacy of health systems in all capitalist states 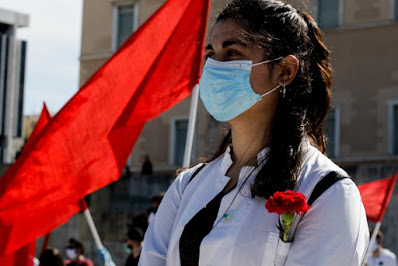 Statement by the European Initiative of Communist and Workers' Parties on the new outbreak of the pandemic:

The new outbreak of the pandemic throughout Europe is a reality that did not come out of thin air. The claims of the bourgeois governments that they “took measures” and “shielded the public health systems” after the first wave of the pandemic, as well as that “in the course of the pandemic the EU wised up and stands in solidarity with the peoples”, are myths.

Following the new wave of the pandemic, all these claims are day by day revealed and bankrupt. The increase in deaths, cases, and intubated patients reveals the responsibility of the EU and the government directions over time, which left the public health systems destitute of staff, infrastructure, ICUs, reagents, and tests.

These huge shortcomings pave the way for the private health business groups that rush to take advantage of the peoples' concern and illness to gain profits. Because they are the ones who profit from their golden partnerships with public institutions but also charge the workers for tests and treatments for the virus or other diseases and illnesses, which, regardless of the pandemic, require examination, treatments, and surgeries that the “one disease” hospitals of the public health system cannot cope with.

Governments and big employers have enormous responsibilities for the deficient protocols in accordance with the priorities of the big capital, the lack of essential measures of protection for the workers at the workplaces, the perpetuation of problems at elderly care centers, the miserable conditions in the refugees - immigrants structures, the schools, the means of transportation, etc.

While exploitation continues at all levels; it is unacceptable that education, struggle for rights, political and cultural life are restricted based in the name of the pandemic.

7 months have passed since the outbreak of the pandemic and they still have done nothing about the substantial strengthening of the public health system and the real addressing of the huge shortages formed by the commercialization, under-funding, and under-staffing policy that the governments and the EU followed. Based on the same criterion, that is the cost-profit, they also left schools unprotected. They provocatively tried to blame the people in the name of individual responsibility in order to justify their anti-popular policy and enormous responsibilities.

Conspiracy theories are a useful supplement to the anti-popular policy. At a time when the distrust of the bourgeois state and its staffs is justifiably growing and the pandemic reveals the criminal inadequacy of health systems in all capitalist states, it is indeed a great service to the system to entrap the people in a debate about accepting or denying the use of masks or about the existence of the virus.

In the face of this policy, the developments affirm the need to further strengthen the struggle of the peoples for exclusively public - free health systems and all the necessary measures for protecting their health and life.

For the strengthening of the public health system with full financing, massive recruits of permanent doctors and nurses, contemporary equipment, and requisition of private health structures. For immediate measures at workplaces, schools, means of transport, and generally everywhere!

The degradation that forces the doctors to choose over who will live and who will die, leads the nurses to wear plastic bags to protect themselves and the general situation that affects the health and life of the peoples reveal that the real virus and visible enemy is capitalism itself.

The example of Cuba, as well as the valuable and generous contribution of its militant doctors, are indicative and exposethe capitalist barbarity we live in. The promotion of the superiority of socialism is more timely and necessary, as its achievements in health-care, education, work, and popular rights are light years away from the capitalist jungle. It is the world worth fighting for in order for the people to satisfy their contemporary needs.