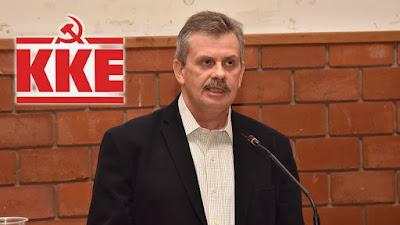 
In the event, which aroused the interest of many students and university employees, the speech was made by Eliseos Vagenas, member of the Central Committee of the KKE and responsible for the International Relations Department. After the speech, there was a discussion based on the developments, with questions about the antagonisms and the stance of the government and the other bourgeois parties, as well as about the positions of the KKE.

Among other things, El. Vagenas highlighted that: “These days, mark the 24th anniversary since the developments in Imia in 1996. The so-called “Crisis in Imia”, was completed with the thanks of the then Prime Minister Simitis towards the USA and ended with the American command “NO FLAGS, NO TROOPS, NO SHIPS” in Imia. However, this did not stop the further sharpening of the Greek-Turkish relations, which manifested itself in various ways, up to the theory of the so-called “Blue Homeland”. In brief, the whole development showed that the intervention of the American imperialists in reality held nothing good for the sovereign rights of the country, for true peace, not this imperialist “peace”, which is imposed with the “gun to the head”, for the promotion of interests that are foreign to the peoples.

The current intensity of the Greek-Turkish relations is not due to Erdogan, as some may say, who is presented as an “imponderable factor”, a “psychopath”, a dangerous politician who after the attempted coup “has unlocked”.

Those that say so act like they have not noticed that the leader of the Turkish opposition, Kılıçdaroğlu, competes with Erdogan in the nationalist hysteria, in challenging the sovereign rights of Greece in the Aegean Sea”.

Eliseos Vagenas made reference to the cooperation as well as the antagonisms between the two bourgeois classes that have sharpened due to the aggressiveness of the Turkish bourgeois class against the sovereign rights of Greece and Cyprus and added: “We notice that on the one hand, the profits of the businessmen  are increasing due to the cooperation of the bourgeois classes, and on the other hand there is a growing and dangerous risk for the peoples of the two countries to face a “hot incident” or even a wider conflict with tragic consequences. All the above show that the causes of the situation that we experience are none other than the relations formed by the ruling bourgeois classes of the two countries. Relations, that like a magnet, have both the “pole” of cooperation and that of fierce competition.

In this second “pole”, we see on the one hand the ambitions of the Greek bourgeois class to enhance its positions in the region, benefiting from the difficulty that the relations between the USA – NATO and Turkey are facing this period, while deepening its involvement in the imperialist plans at the expense of other peoples, i.e. by sending “Patriot” missiles to Saudi Arabia or warships in the Strait of Hermuz. On the other hand we notice the excessive ambitions of the bourgeois class of Turkey.

The ruling class in Turkey aims to play a more important role in the developments, not only regionally, but globally as well. It is among the 20 most powerful capitalist economies, it has the second biggest army in NATO, while it also among the 10 most powerful military countries in the world.

On this basis, we can understand better why the Turkish bourgeois class not only disputes (with the support of the USA and NATO) the sovereign rights of Greece in the Aegean Sea, aiming to take a part of the its energy wealth, not also disputes the sovereign rights of Cyprus aiming at the “de jure” partition of Cyprus by promoting corresponding partition “solutions”, a confederation of two states with the smokescreen of a “federation”, but also why it disputes today treaties that have defined the borders in the wider region. Turkey has invaded and maintains occupation armies in three countries, that is besides Cyprus, in Iraq and in Syria. It sends troops and builds military bases outside of Turkey, such as in Qatar, Somalia, Albania etc. It proceeded to the unacceptable agreement on the Exclusive Economic Zone with the appointed Libyan Prime Minister. It seeks to utilize for its own plans the issues of religion and minorities.

Clearly, the “tone” in the developments is set by the antagonisms of the bourgeois classes of both countries, which aim to drag the two peoples into criminal hostilities. At the same time, however, we must know that the bourgeois classes of the two countries (Greece and Turkey) are not alone in this dangerous “game” of war that the capitalists and their governments have set. The Greek-Turkish relations are shadowed by the involvement of the imperialist organizations of NATO and the EU, as well as other powerful imperialist forces.”

He also referred to the developments in the wider region of the Eastern Mediterranean and the way in which the competitions among great imperialist forces and organizations are intertwined with the Greek-Turkish relations. 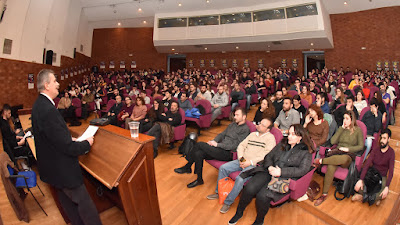 He criticized “certain “leftwing voices” that wonder whether we falsely focus too much on the Turkish aggressiveness at the expense of the sovereign rights of Greece and Cyprus. Certain other “less leftwing voices” align with the “tale” of the bourgeois parties and say that: “We will go to Hague in order to find a solution”, “to have a co-exploitation”. Of course, there are also those whose hatred against the KKE leads them to the slandering that when the KKE talks about sovereign rights, “it aligns with nationalism”.

To begin with, regarding the International Court of Hague, we should know that its decisions are affected by political geostrategic factors. That is to say, we are not talking about an impartial and flawless process. On the other hand, the notorious “co-exploitation” of the energy resources, concerns how the various monopolies will share the profits and not the peoples.

The KKE defends the sovereign rights because it believes that they do not belong to the bourgeois class. The working class and the popular strata have a say and the KKE pays the needed attention to the maritime zones to which the country is entitled, because it fights in order for them to become property of the people, to exploit them for its own benefit, in cooperation with other peoples.”

Eliseos Vagenas highlighted that “there can be no “national unanimity” with those that turn Greece into an endless US-NATO military camp, targeting our people”. He also referred to the joint struggle of the people in Greece and Turkey, their common goals, as they are described in the recent joint announcement of the Communist Party of Greece and the Communist Party of Turkey. A joint struggle against the bourgeois classes, for the disengagement of the countries from the imperialist unions of the EU and NATO, for the abolition of exploitation of man by man and the satisfaction of the contemporary popular needs, for the eradication of those causes that lead people to the deadly machine of the imperialist war” and added that «in these developments, the main issue is to make clear that capitalism not only has reached to its end and has nothing positive to offer to the peoples, but is in fact dangerous and interlinked with war. The bourgeois classes and the imperialist unions are enemies of the peoples. We should not expect from the wolves to take care of the sheep.

To the extent that this truth is understood, the workers’ – people’s movement will be strengthened and it will proceed to the counter-attack, in order for our country to exit the imperialist plans and unions, with the people master of its land and make true the slogan “Neither land, nor water for the killers of people”!”