We militantly greet all those who supported the KKE in this electoral battle, continuing an similar cooperation that existed during the European Parliament elections.
This cooperation has its own dynamic, one that is not exhausted by candidacies, neither is it measured only by the ballot box. It expresses processes that can be multiplied within the labor and popular movement, in the struggles that must be developed, against the anti-people policies that will be continued by the newly-elected government of New Democracy.
The next day must find new forces on the path of counter-attack, on the path of class policies and mass struggle, the regroupment of the labor movement, the promotion of an anti-capitalist, anti-monopoly social alliance and the drawing of women and youth into the movement.
The strengthening of the political influence of the KKE in working class neighborhoods,in industrial areas of urban centers, shows that the only path to strengthen the KKE in the class struggle and in the parliament is work inside the factories, the department stores, the streets with small shops, in working class neighborhoods, in the health sector, in education, especially  in places where youth are concentrated, when different individual movements and actions unite at the national level with common demands and a direction of challenging the system.
2. The conditions of the Parliamentary election, just as with the European Parliament elections a month ago, reflected the new correlation between the bourgeois parties, with the main feature being the governmental alternation between the two biggest parties of capital, the monopolies, the EU and NATO.
This governmental alternation takes place within the context of the ruling class's more general aims and demands for a more planned intervention, with the goal of safeguarding the governance system with greater stability and efficiency in the face of potential future risks stemming from the anemic capitalist economic recovery and the sharpened imperialist rivalries that are raging in our region and elsewhere.
The electoral results recorded to some extent a justifiable popular dissatisfaction with the SYRIZA government that had continued the anti-people program of the ND and PASOK governments.
However, it is negative that some people, because of SYRIZA policies, turned toward older previously tried anti-people choices. SYRIZA, implementing “right-wing” anti-popular policies with “left-wing” phraseology brought about greater confusion concerning what is “right-conservative” and what is “left-progressive.” It allowed ND and PASOK to appear justified, to cynically project their anti-people program, the need for a swifter promotion of anti-people restructuring.
ND took advantage of SYRIZA's anti-people policies and the dissatisfaction it caused in order to return to governmental management with a vengeance. SYRIZA served the capitalist system, the EU, NATO in the best possible way, with the result that to a certain degree it destroyed its “left” mask, the image that it wants to give to itself as the continuation of the National Resistance of EAM. At the same time, it attempted and is attempting to renew its forces by drawing from from the space of social democracy and the so-called center-left, appearing as the continuation of E. Benizelos, A. Papandreou, and others. This is the meaning of “reforming SYRIZA”, vying for the PASOK space and recently that of MERA25. The supposed transformation of SYRIZA only leads to the greater reinforcement of the very same anti-people political system.
SYRIZA just as PASOK in the past, tries to 'dress' barbaric anti-people policies with the mantle of “progress” and a “progressive alliance, ultimately denigrating the values of real progress, fueling reactionary reflexes both with it own policies, but also with the negation of hopes from significant sections of the people.
A part of popular dissatisfaction was directed at other forces that were supported and prepared to play the role of either an embankment to genuine popular radicalism or a complement to anti-people government management for the benefit of the capitalists, taking the place of previous ones, such as the Potami, the Enosi Kentron, ANEL and others. At the same time, SYRIZA continues to entrap labor-and popular forces with the logic of a seemingly more "painless capitalist management", "correction of the EU", and "necessary" participation in NATO.
3. The class correlation of forces remains very negative, not only in Greece but also in Europe as a whole. In our region, the trade union and popular movement has not gone into a dynamic phase of mass counter-attack yet.
The fact that the bourgeois parties can delude the vast popular majority, creates further difficulties in the the labor – popular struggle. The electoral results reflected an overall trend of retreat to conservatism, seeking solutions from a supposedly better management of the capitalist system. Within broad sections of the people the trend of reduced demands, defeatism, and fatalism predominates. However, many working people choose the basic bourgeois parties with a heavy heart, without enthusiasm, and more importantly, without hope that something can change for the better in their lives, maintaining the faint hope that “things won't get worse”.
Today, these working people have a more positive stance towards the KKE, monitoring its positions and seriously thinking about them, even though they still haven't been convinced to take a more decisive step. The KKE's positions attracted interest and positive consideration, independently of whether people chose KKE at the ballot box, or not.     All of this is a very serious reserve for the people, but also a responsibility for the KKE, to be a powerful springboard for militant rallying within the ranks of the labor – popular movement. The KKE has faith in the working class, that it will dash the hopes of the bourgeois class and its parties who aim for it to continue to be manipulated and hesitant for a long time period, but finally the working class will become the key factor for the change in the correlation of forces in the movement and at the political level with the goal of power. 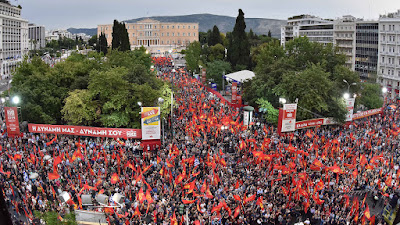