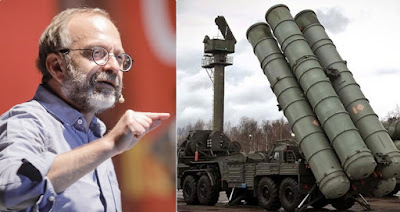 Although taking a short way may lead to a false answer, we can remind some propositions that apply to almost every example.

A government cannot be a werewolf at night and human in the morning. The class ground it steps on is the same inside and outside. Therefore, it can only be rendered possible by a nationalist contamination to attribute virtue to the foreign policy of a government whose domestic policy has been negated when looking from inside. We insistently emphasize the difference between nationalism and patriotism: While nationalism says “my exploiter, my thief, my tyrant is good", patriotism assigns the will to cleanse the exploiters, thieves, and tyrants to the love of the country.

In domestic politics, there is only one authority, one center of power, although sometimes it remains on paper. Foreign policy, on the other hand, is carried out in an environment where the will of many actors is confronted and each of these wills obtains the source of legitimacy from international law to some extent. Therefore, a government cannot transfer its domestic policy to foreign policy as it is.

Undoubtedly, we can talk about social, political and ideological factors that restrict governments in domestic politics, but the character of these constraints changes in the international arena. Foreign policy is pursued on a platform of tens or even hundreds of units, each of which holds a monopoly of arms within defined limits and whose legitimacy is recognized internationally except in certain circumstances and cases.

This platform has a hierarchy; the most powerful imperialist countries are at the top of the hierarchy, but even the strongest ones have limits of authority or power. And in this hierarchical structure, there is an uninterrupted competition that sometimes turns into open conflict.

Now, based on these propositions, we can evaluate the example of AKP. It is inconsistent to support AKP in foreign policy and to oppose inside. Besides, without taking into consideration the hierarchical structure in the international arena and the contradictions within this structure, it is often wrong to repeat the perspective of domestic politics in the international arena.

As an example, it is clear that there are political and economic reasons for the AKP's attempt to get along with some progressive powers in Latin America. Highlighting these reasons consistently and warning the international community of the selfish interests of Turkish bourgeoisie are not sufficient. These are not sufficient because the interests of the revolutionary movement in the international arena can be determined by calculating very different balances, not by the needs of the struggle in a single country.

In a country, the revolutionary movement has to take into account the following parameters when evaluating the international developments:

-Defending the interests of the working people in the country

-Defending the interests of the working people in other countries

-The revolutionary movement to strengthen in national, regional and international scales

These may not lead to the same directions every time but a revolutionary movement should evaluate these parameters as much as possible and observe the harmony between them.

How can we evaluate Turkey's purchase of S-400s from Russia after saying all these?

Without putting aside the fight against the AKP government, without neglecting the need to reveal the logic of its relations with Russia, and without living an illusion about the class and ideological character of Putin's power in Russia, it should be said that:

Turkey's purchase of S-400s can be interpreted as it is in accordance with the interests of the people as it deepens the internal contradictions of the world's most powerful terrorist organization NATO, as it reduces NATO's intervention capability, and as it shakes the influence of US imperialism in Turkey.

I am not saying that it is a development for the benefit of the people, but a development that can be interpreted as in accordance with the interests of the people. Working people in Turkey cannot be a part of the competition in the imperialist system. However, every opportunity should be taken to break the influence and interventionism of Western imperialist countries and institutions such as NATO and the European Union, which are working towards deepening current system of exploitation, injustice, and inequality. In this sense, the S-400s should be seen as a major crack in the imperialist system, not just as an air defense system.

Turkey's withdrawal from NATO and the EU candidacy status are the demands that the communists have been shouting for many years. These demands are still actual and should now be shouted more. The AKP government's part in the game of S-400s by leaning back on the domestic and foreign monopolies and not questioning NATO and the EU can result in a disaster which further strengthens the presence of the imperialist countries in Turkey.

The way to fight off this disaster is to raise the struggle against US imperialism and NATO. And this struggle should never be considered separate from the struggle against the exploitative capitalist class, which loots all the resources of the country, and the tyrants in power that have been feeding the capitalist class for years. S-400s should not be dropped on the oppressed class but should explode in the hands of the oppressors.