D. Koutsoumbas: "The EU and its governments lay the ground for fascism's rise in Europe" 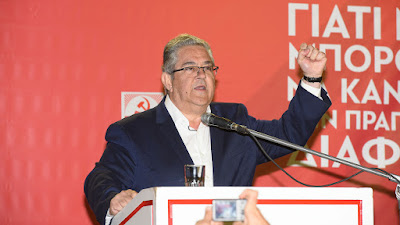 "SYRIZA and New Democracy (ND) are identical in the goal to recover capitalist profits. That is why in the plans, in their declarations, there is not even the slightest mention or commitment for the abolition of the memorandums, the hundreds of memorandum laws that threw salaries and pensions to the bottom, crushing the workers' rights", said Dimitris Koutsoumbas, the General Secretary of the CC of the Communist Party of Greece (KKE) during a speech in the city of Trikala.

The memorandums of austerity, said the KKE leader, "was not a simple deviation as a result of the crisis, are they argue. They were tools in the hands of the governments, while being in situations of crisis, in order to rapidly implement the demands of the capital. That's why no government, neither a SYRIZA one, nor a ND one, is going to abolish them".

Refering to the existence of the far-right current in Greece, Koutsoumbas pointed out that "a real front against the far-right and fascism could only exist through the big strengthening of the KKE, so that the criminal Nazi Golden Dawn will be toppled from the third place, so that her candidates in Regions and Municipalities will hit bottom in the elections, so that her stooges in the neighborhoods and labor places will be isolated, in order to strengthen the struggle against the interests that generate and nourish fascism".

Regarding the EU, the KKE General Secretary stressed that "no matter how progressive alliances SYRIZA will make, the EU cannot become pro-people and progressive, because it is reactionary by birth. Because it is a union of capitalist states, it is their own mechanism for the interests of their monopolies".

Dimitris Koutsoumbas also mentioned the antipeople, antiworker character of the EU, adding that this character remains the same "independently from which bourgeois forces - social democratic, neoliberal or far-right - have the upper hand in the governments of the member-states". "The EU is antipeople" - the KKE leader said - "because these governments, no matter what they call themselves, are institutions of the monopolies' power".

Koutsoumbas underlined that "progress is not the EU of anticommunism, the anti-historical theory of the two extremes, the equation of fascism with socialism-communism, the persecutions and prohibitions of communist and workers' parties". He furthermore added: "Because they talk all the time about the rise of the far-right, we say to them that it is precisely this EU and its governments that lay the ground to fascism in Europe".

The speech of Dimitris Koutsoumbas in Trikala consisted part of numerous political events organized by the KKE, ahead of the European and local elections of May 26th.