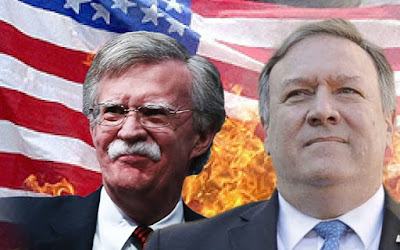 Cuban Foreign Minister Bruno Rodríguez said today that lies are the basis of the aggressive escalation of the United States against Latin America.
'Bolton and Pompeo lie again and again (...) Accusations vs. #Cuba is a vulgar slander. Blackmail is unacceptable. They look for pretexts to intensify the blockade and hostility against the Island, 'the foreign minister wrote in his account on the social network Twitter.Earlier, Rodriguez rejected the pronouncements of the US Secretary of State, Mike Pompeo, who accused the largest of the Antilles of being 'the true imperialist power in Venezuela.'
In response, he expressed that Pompeo 'makes a fool of himself with such a claim. His government ransacked it for two centuries, organized the coup of 2002, the oil attack in 2003, invented the self-proclaimed president Juan Guaidó and celebrates the electric shock.In addition, the Cuban head diplomat reaffirmed that Cuba does not intervene in the internal affairs of that South American nation, denounced 'the tendency to lie without limit or any restraint of the government of the United States' and warned of its dangerous consequences.On repeated occasions, Havana has denounced the increase of Washington's hostility against Latin American nations and the imposition of new sanctions on the island.The Cuban government repudiates such actions and considers them a clear step towards a course of confrontation, using as spearhead the resurgence of the economic, commercial and financial blockade imposed for almost six decades.Last April 17, the administration of Donald Trump reinforced the siege with the activation of Title III of the Helms-Burton Act, a chapter with which it is committed to economic suffocation as an instrument for regime change.He also reported that it will increase restrictions on travel by Americans to Cuba and limit the remittances sent by Cubans living in the United States to their relatives. 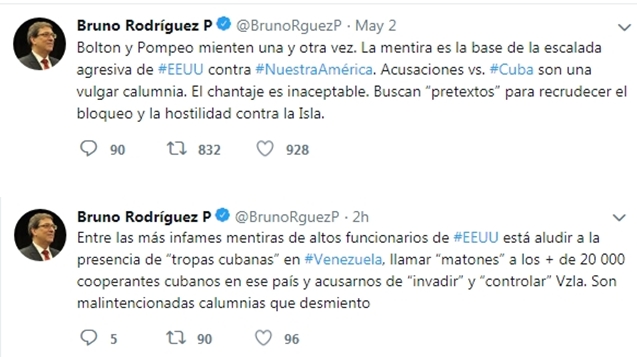 “There are no Cuban troops in Venezuela. There are no security forces from Cuba in Venezuela. Cuba does not participate with military troops or personnel in military operations in Venezuela. These falsehoods constitute an affront to the people of Cuba, the government of Cuba, the people of Venezuela, and the international community, sovereign states and the U.S. people who deserve to know the truth,” reiterated the Cuban Foreign Ministry’s Deputy Director for the United States, Johana Tablada, in statements offered to the press this Wednesday, May 1.
Tablada stressed that in recent weeks the Cuban government has denounced a series of accusations, falsehoods and slander regarding the nature of the cooperative relationship between Cuba and Venezuela, headed by “a pathological liar, former ambassador John Bolton, who has a long history of conflicts with the truth,” and today is National Security Advisor to the U.S. government.
She recalled that Bolton lied about the existence of chemical weapons in Iraq, and of biological weapons in Cuba in 2002, lies that cost him his appointment as U.S. ambassador to the United Nations, following a Senate Foreign Relations Committee hearing, which led to his own party voting against him and recommending that he be prevented from returning to public office at such a high level.
The Cuban diplomat emphasized that the escalation in accusations in recent days is intended to conceal the failure of the sustained U.S. policy of aggression against Venezuela, and the frustration after the second coup attempt against the legitimate government of Nicolás Maduro was also defeated. “The objective is to shroud the real support that exists in Venezuela for the government and the Bolivarian Revolution, and the lack of support for the self-proclaimed or supposed leaders chosen by the United States.”
Tablada explained that the intention is to find the most convenient pretext to impose and justify new measures of aggression against the Cuban people, on claiming that the island has 20,000 soldiers posted in Venezuela and is interfering in its internal affairs, “something that even the U.S. government knows is untrue.”
She noted that as part of this same policy of hostility, the U.S. President threatened the island with the proclamation of a “full and complete embargo,” if its troops were not withdrawn from Venezuela. “We can’t withdraw something that does not exist from Venezuela. This is a disrespectful statement that conceals the cruel nature of the scope of these measures against our people.”
Johana Tablada highlighted that such recent announcements appear to overlook the fact that for 60 years the people of Cuba have suffered the most wide-ranging, complex and absurd system of unilateral sanctions and coercive measures in history, and that “Bolton is delirious when he says that the whole world supports the sanctions.”
“This decision will be met by our country, by our people, by our government, as always: we will denounce it, but we will resist. The people of Cuba will resist and triumph,” she concluded.