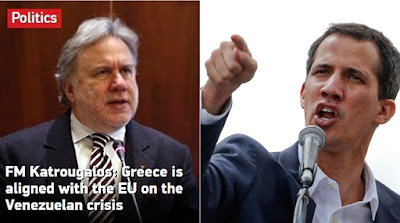 The social democratic government of SYRIZA in Greece has openly endorsed the EU position for government change in Venezuela.

In a message posted on Twitter, Minister of Foreign Affairs Giorgos Katrougalos wrote: "In the crisis of Venezuela, Greece sides with Europe and the positions of High Representative of the EU F.Mongherini, which she co-shaped".

Katrougalos, commenting on the EU stance, added that "yesterday the democratic Europe was clearly and responsibly placed. It asked for a solution only by peaceful, democratic means, elections, in order to avoid a bloodshed".

The stance of Tsipras' government consists a clear adoption of the imperialists plan to intervene in Venezuela and impose a regime change. It is characteristic that on Monday 22 April, a member of the reactionary Venezuelan opposition met with SYRIZA MP Kostas Douzinas in Athens. In an interview he gave after the meeting, Douzinas stated that the Greek government supports Guaido's proposal for elections. 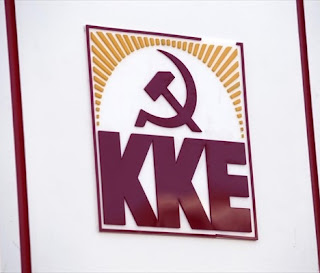 On the occasion of Foreign Minister Katrougalos' statement on the situation in Venezuela, the Press Bureau of the CC of the Communist Party of Greece condemned the stance of the Greek government.

"After 24 hours of deafening silence regarding the ongoing coup d'etat in Venezuela, today's statements of Minister of Foreign Affairs G. Katrougalos came to confirm the role of SYRIZA government as a "hinge" of the Americans and the EU", points out the KKE.

In its statement, the Communist Party adds: "The SYRIZA government not only does not condemn the crude intervention of the USA and EU against the elected president of the country and the Venezuelan people, but also adopts all the aims of the so-called "opposition", positioning itself openly with the positions of the EU which clearly refer to a "soft-coup" in Venezuela. After all, most EU governments - both right wing and social democratic - have already recognized the stooge of the Americans, Guaido, as the country's interim president".

The KKE slams both the positions of SYRIZA and New Democracy (the conservative opposition party in Greece) which "consist a straightforward challenge of the Venezuelan people's right, as well as of every people, to decide for the political and social developments in their country without foreign imperialist interference".

The KKE calls the Greek people to condemn the US-EU interference in Venezuela, as well as the stance of SYRIZA and the other bourgeois parties.