Parliamentary politics and the communist party: the electoral arena, experience and lessons from Greece and the KKE 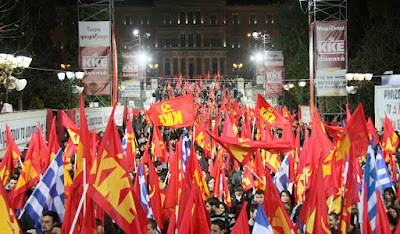 By Giorgos Marinos*.
We would like to thank the South African Communist Party for giving us the opportunity to attempt to share some basic elements from the experience of the Communist Party of Greece (KKE) with our comrades. In our opinion, the exchange of views on the issues of class struggle and the communist movement enhances our knowledge and experience.
Introduction
The KKE was founded as a party of the working class one century ago, in November 1918, as a result of the merging of the labour movement with scientific communism, under the decisive impact of the Socialist October Revolution.

In the 1920’s and 30’s the party was making its first steps while at the same time it was at the forefront of the people’s struggle. It faced the repression of the bourgeois state, dictatorship in 1925 and 1936, severe conditions of illegality, imprisonment and exile.

ON THE PARLIAMENTARY WORK
Our party participates in the elections as KKE. Its lists also include militant people who are not communists but cooperate with the party and the mass organizations supported by the party i.e. trade-unionists, workers, farmers, self-employed, craftsmen, tradesmen, students, scientists, veterans.
Today the KKE has 15 Members of the Parliament (MPs), 2 members of the European Parliament, 5 mayors (amongst them in the 3rd biggest city, Patras), 31 regional councilors, and hundreds of municipal councilors.
The KKE intervenes in the national parliament, trying to prevent the adoption of anti-people measures and voting against anti-people draft laws or directives and other legislative acts of the EU. It tables questions, draft-laws and amendments on serious issues that concern the working class, e.g. the relief of the people’s families from loans and taxation, healthcare, education, in tandem with the struggle of the trade unions, the labour and people’s movement.
Recently it utilized an initiative of PAME and 513 Trade unions, Federations and Labour Centers concerning collective bargaining agreements and tabled a draft law initiating a debate in the parliament. This initiative has been very useful despite its rejection by the SYRIZA-ANEL government and the other bourgeois parties.
The positions of the KKE are normally rejected by the bourgeois and opportunist parties. Nevertheless, these interventions help us to reveal the exploitative character of capitalism and bourgeois democracy as the “dictatorship of the monopolies”.
They contribute to the enlightenment of the working class, the popular strata, and the youth. Based on this information the working people can improve the organization of their struggle.
Every time that anti-people measures are adopted, our party strives and struggles persistently so that they are not legitimized in people’s consciousness.
These interventions e.g. the intervention with a question denouncing measures that commercialize healthcare or impose taxes on the people can be utilized in the broad mass struggle in connection with the activity of the party organizations and the Communist Youth or they can be adopted by the trade unions and other mass organization of the people’s movement. This is the very content of the struggle of our party and our MPs.
The communist MPs maintain strong bonds with the workers in the factories, in the enterprises, with the poor and medium-sized farmers, the self-employed, with the youth in schools and universities, with the employees in healthcare services and generally with the working people in the workplaces and the popular neighborhoods.
In cooperation with the party organizations they collect material in order for the interventions in the parliament to be more effective and revealing.
They are at the forefront of the workers’ and people’s struggles, contributing to the organization of the struggle.
The communist MPs are not detached from the working class and the popular strata not even in terms of income. They give their entire parliamentary salary to the party which, to the extent that’s possible given the needs of the class struggle, provides them with an income that cannot exceed a workers’ salary.
Our party has also a significant experience from the struggle against the Nazi criminal organization “Golden Dawn”. Our party confronts them both in the parliament as well as in the workers’ and people’s movement and tries to reveal the dangerous role of the fascists who are currently in the courts for crimes, murders of militants and immigrants, attacks against communists and forces of PAME. The KKE and KNE, along with militant workers, contribute decisively to the protection of the struggles so that the working class isolates the fascist monstrosity.
The members of the Party who are elected or appointed by the party to legislative bodies, in representative or other elected bodies and generally in the institutions of the bourgeois state implement the policy and the decisions of the party, are committed to the cause of the working class and the defense of its interests and consistently defend the people’s interests.
When party members are proposed to undertake duties in these positions, the opinion of their Party Base Organisations and the respective organs must be taken into account.
This position is at the disposal of the party. The leading organs may appoint them to another field of responsibility according to the needs of the party.
The salaries, the allowances and the pensions or any other economic benefits that flow from this position belong to the party and are granted to it.
The MPs who are members of the party comprise the parliamentary group.
The lists of the party are formed by the CC, according to the proposals of the leading organs of the party organizations. The CC decides on the composition of the parliamentary group and its secretariat that coordinates its work.
The activity of the Party in the parliament serves the goals and the needs of the class struggle.