Bluff of President Putin or on intervention of USA in Russian elections.
Viktor Tyulking talks to Dmitry Volgin, March 5th, Leningrad.
As the address of Russian President to the joint assembly of the two chambers of Russian Parliament was unusual and caused a lot of agitation and questions in local society, we decided to ask the 1st Secretary of ROT Front Central Committee Viktor Tyulkin to comment on the presidential speech.
Corr: VT, you must have listened attentively to the address of President and now I’d like to ask you right away: why it’s so different if compared with his previous addresses?

VT: First, we should point out that this wasn’t the address of the President, it was in fact an address of presidential candidate. There was next to nothing in terms of analysis of the results whereas the main attention was dedicated to the election promises. That’s the reason why the address was postponed until as close to the election date as possible and a much bigger “Manezh” hall with the possibility of using big screens to demonstrate graphics and animation was chosen instead of Big Kremlin Palace as on previous occasions. Here goes also the choice of the themes with the focus of attention on ensuring defensive capacity.
Corr: What are the reasons in your opinion?
В.Т.: I think that Putin’s ratings are actually not so high as presented by local opinion polls agencies, that’s why they have to go out of their ways to maintain the image of Putin: first it was the broadcasting of Oliver Stone’s documentary about him on the 1st TV Channel, now it is this address full of propaganda. We haven’t heard a word from either the Central Election Committee or from other bodies responsible for law enforcement. By the looks of things officials are ready to use any means to ensure the percentage as requested from them.
Corr.: Do you believe that the presentation of the results achieved during the preceding period was skipped because those were not in favour of Putin? The state of affairs in Russia is not so bad after all. The situation has been more or less stable and the issue of Crimea has been still influencing the public opinion.
VT.: Putin did exactly that. He said that a lot had been done, that Russia had been on the rise and that we would move in the same direction on. He gave everybody a message that one wanted to hear from him. Still Putin should have reported on the fulfillment of his election promises given to people 6 years ago (known locally as Decrees of May 2012) and here there is actually nothing to boast about.
He promised to create 25 millions of Hi-tech working places. Where are they? Nowhere to be found - bluffagain. He promised that productivity should increase by 50% over those 6 years. What is the actual increase? – zero. It’sbluff.
He promised that the real income of population would increase by 40-50%. What are the real results? Income decreased by 5%. It’s bluff again.
He promised that by 2018 the investment should constitute 27% of GDP. The actual figure is 19% - i.e. by next to 10% less than promised. Bluff?
It was promised that Russia would become the 5th economy of the world. Now Russia occupies the 11th place instead that means that the share of Russia in the world economy has fallen from 2,1% to 1,7%- the share of Russian economy is currently less than it was 18 years ago when he became president for the first time. At the same time during his reign the number of USD billionaires in Russia has increased from a dozen to more than a hundred whereas the list of billionaires is headed by Putin’s cronies. Sure, this theme is not suitable for serious discussion. That’s why he prefers to attract attention of the listeners to the issues of defense and the alleged special role of Russia as savior of the world. 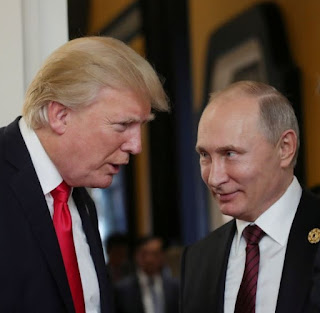 Corr.: Do you believe that the statements of Putin regarding the threat to Russia coming from USA and NATO are ill grounded and his demonstration of new weapons designed in Russia is bluff?
VT.: I am of the opinion that exactly his promises regarding social internal politics represent his main bluff. As to regards the military threats, I’m sure that these don’t represent the main type of threats for Russia at the moment, whereas when he speaks about the defense, it is the defense of Russian oligarchs, and primarily those oligarchs that belong to Putin’s close circle that is meant.
As to regards particular types of weapons displayed, we can say that their development was started in Soviet times, and this means that he lies again. This is just saber rattling and in particular it’s in favour of American hawks who can expect sharp increase in military spending. Militarization of economy is a proven means to treat crises. We wouldn’t be surprised to know that this part of election campaign was agreed with USA, possibly during the last visit of the head of Russian secret service to Washington. One can now raise an issue of USA interference in Russian elections.