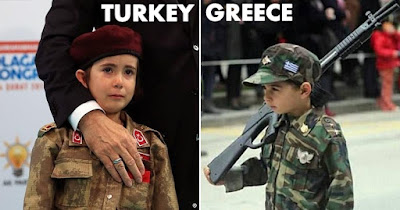 Nationalism in both Turkey and Greece has no hesitation to use the innocent image of little children in order to promote warmongering plans and attitudes. The above photos are indicative of the ruthless nature of warmongers-ultranationalists in both sides of the Aegean.

The photo on the left was taken on February 24th and depicts a six-year old girl wearing a special forces uniform, standing next to President Tayyip Erdogan during a televised AK Party event in Kahramanmaraş province.

Erdogan invited the sobbing girl to the podium and promised to honour her with the Turkish flag if she were to be martyred.

The photo on the right was taken on March 25th during the military parade in honour of the Greek Independence Day in the city of Alexandroupolis. A little boy, dressed in military uniform and carrying a toy-rifle, parades during the ceremony.

The working people, the youth, in Greece and Turkey have nothing to divide. Both the Greek and Turkish people must firmly oppose the imperialist-warmongering plans of the bourgeois class in both countries and strengthen the struggle for solidarity, peace and friendship.