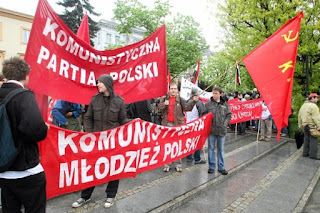 The question to the Commission with a demand for a written reply, which was tabled by the MEP of the KKE, K. Papadakis, was as follows:
"Recently members and cadres of the CP of Poland were convicted by the regional court of Dąbrowa Górnicza to prison sentences of up to 9 months, many months of "limited freedom" and compulsory social work and also fines, because the dissemination of their ideas through the newspaper "Brzask" and the website www.kompol.org is considered to be an "offense" and a "crime".The court in order to convict them, following the anticommunist positions of the Polish authorities, utilized rotten and groundless accusations regarding "the public promotion of a totalitarian system". This is part of their attempt to cancel and slander the gains of the workers under socialism, the right to work, labour and social rights. The Polish authorities have for some years provocatively banned the communist symbols and now convict the communists, invoking "democratic values".
Similar anti-communist persecution, convictions and bans against CPs have also been imposed in other EU member states, with the open support of the EU which has elevated anticommunism into being its official ideology, something that goes hand in hand with the intensification of the anti-people onslaught. Now there is enough evidence so that everyone can understand what the EU's declarations about the "values of freedom and democracy" really mean.
The Commission is asked: Are the banning and persecution of the communist ideology, the criminalization of the expression of communist ideas and of the activity of communists imposed by the authorities and government of Poland part of the EU's "values"?