Communist Party, Turkey: Step into action!
Turkey must exit NATO.
The EU membership process must stop;
All military agreements with the US must be abolished, all relevant military bases must be closed;
All religious associations must be dissolved. Any religious discourse must be forbidden in politics. Educational system must be refashioned on the secular basis;
The support for the terrorist groups in Syria must be called off.
These are the urgent demands that must be raised and popularized after the coup attempt of the Gulenists and their collaborators.

The Communist Party cannot let the immediate connections between the unjust system in the country and what happened thereof be passed over while struggling for such demands.
All those crimes the coup plotters committed, all that violence we lived through, all that counter-violence used in suppressing the coup, and the street terror that went along these... All these are the continuation of the crimes, which were committed by the now-broken alliance of the fighting sides.

Besides, among those crimes are the selling of the TÜPRAŞ, Sümerbank, Telekom,* and other public entities to local and foreign monopolies. Among those, is also privatization of education and health sectors, making them subject to profit maximization. Among those, are repression of the working class, their being forced to disorganization, and lowering the wages. Among those, are disrupting the agriculture, destroying the balance of the nature.

These crimes are no less significant than the cruelties, which portray the bloody picture we witness today.

The agents of this total attack on our working people and coup plotters are co-members of the same parasitic class.

As the Communist Party, we warn our people: Do not fall into this trap, these actors represent two sides of the same coin, do not overlook this unity!

Unless this system changes, unless the domination of the capitalist class that grows richer and richer by exploiting the labor, unless Turkey stops anticipating for getting a slice of the cake by approaching to any of the competing imperialist centers, neither poverty, unemployment, chaos, war nor coups will end. It is a must to be in solidarity with other working peoples of the World and to back those brothers/sisters who live by the sweat of their brow; whereas it is a desperate and bloody adventure to flirt with competing great Powers who antagonize peoples.

An imam without sanity attempted to seize the fate of the country by a bloody coup. And a wannabe sultan who is no better than him has been drifting the society backwards, into the darkness.

On the other hand, on our side are tens of millions of working people!

When tens of millions of working people of Turkey unite and organize, together we will deliver our country from this trap, we will call all the crimes of this order to account, and we will get rid of wars, coups, poverty, and fundamentalism once and for all.


Then, we shall not be bystanders of this disgrace, this violence!
To create the united power of the people...
Step into action!
*These are some of the large-scale public firms from energy, communication, textiles and finance sectors once belonged to the state (and people) and were privatized along the last decade.

Below are the interviews with Kemal Okuyan and Özlem Şen Abay on the issue:
Kemal Okuyan (First Secretary of the CC of Communist Party, Turkey)
AKP continuously speaks of a second coup attempt. Do you think that they aim to reinforce their power and to abuse the coup or is there really a possibility of a second one?
KO: AKP has been confronted with a group which it had associated with for years. Nobody knows where this group starts or ends. Besides there are some other factions which joined them. When you add up the international dimensions it becomes a conjuncture which is prone to new coup attempts and interventions. On the other hand AKP seems to benefit from this tension. The people lose themselves amongst the factions. That’s why KP insists on emphasizing the class dimensions, points out the inner contradictions of the imperialist system. Those balances will shape the developments of the upcoming period. We can assume that the capitalist class will incras the interventions. Turkey will not conform to Erdoğan’s mind; Erdoğan will conform to the balances we’ve mentioned, or he’will be liquidated. Obviously this is a chaotic process, it will be tough. The important point is that the working class should show its weight.
How will KP act in those circumstances, how will be its political lines?
KO: KP has to accomplish multiple tasks as a whole. Firstly we have to convey the reality to the people, in order to prevent them to withdraw themselves in such a chaotic environment. Secondly, the contradiction of the classes should be kept visible while struggling with the islamist-fascist threat in Turkey. Neither of them is the leading actor; There is no way to stop islamism without struggling against the hegemony of the capital, which is already our essential task. The bourgeois way of laisizm has brought us to the point of a bloody fight between two imams. Our party is totally aware of the danger, it had always been, yet the biggest danger is pessimism which we shall not allow. We won’t let this happen. Apparently the international solidarity carries great importance in times like these. We have been receiving many solidarity and support messages -which, some of them started concrete and new collaborations- from communist parties of the world. Turkey possesses strategic importance for many regions. We will not let this country to be the toy of the competitive forces within the imperialists, the international monopolies. In Turkey the working class exists, this is a progressive asset. It is our Party’s responsibility to reveal this.
Özlem Şen Abay (Member of the CC of Communist Party, Turkey) 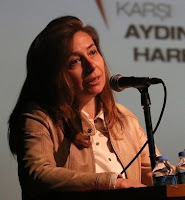 What does exactly that “State of emergency”issued by the Government mean? Why did they need it?
ÖŞA: It seems that Erdoğan has pushed the button of  a comprehensive operation just after the coup attempt on July 15. It has been stated that the total number of people in custody is 10 thousand 410, so far. There are civil servants from the police forces, jurisdiction, universities and some other state institutions amongst those, not only the military members. Erdoğan has already asked for the resignation of all the Deans of all the universities, called off the annual leaves of the public employees and terminated the contracts of many civil servants. The State of Emergency is based on the Constitution and states as: “In the event of serious indications of widespread acts of violence aimed at the destruction of the free democratic order established by the Constitution or of fundamental rights and freedoms, or serious deterioration of public order because of acts of violence, the Council of Ministers, meeting under the chairmanship of the President of the Republic, after consultation with the National Security Council, may declare a state of emergency in one or more regions or throughout the country for a period not exceeding six months.” According to the Constitution when state of emergency is declared the President is assigned as the Chair and assigns the province governors with extraordinary authorities which allow them to intervene when required. Among those authorities there are measures like: declaring curfew; putting ban on meetings and rallies; intervening to the media and extending the custody periods. The “State of Emergency” becomes the name of the only solution Erdoğan and his Government could find out after they were left with no one to trust to. Yet we reckon that this would lead him to a bigger deadlock.
To what extent this would restrain the activities of KP?
ÖŞA: There are no restrictive clauses openly stated within the declaration of a State of Emergency regarding the activities of the political parties. Yet, during the state of emergency the Council of Ministers has the authority to decide Decree Laws which are not under control of jurisdiction. So, this is the actual situation where the ones who have the extraordinary authority could decide by their own intentions. Time will show how the activities of our party will be affected, in a period when Erdoğan's political actions get more oppressive and he continues with the one-man-domination kind of governance.
The latest figures from Turkey in the aftermath of the coup attempt and the state of emergency followed: