Erdogan vs Coup: The two sides of the same coin 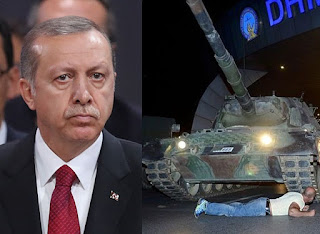 It is certainly too early in order to draw solid conclusions about the attempted military coup in Turkey. The developments and the information we receive are rapid and continuous. Numerous questions arise: Who was really behind the attempted Coup? What were the real motives of this action? How will Tayip Erdogan and his government respond in the next few days? However, what is sure is the framework within which the developments in Turkey are taking place: It is a framework of inter-bourgeois contradictions which reflect a sharp rivalry between different parts of the Turkish Capital.

The attempted military coup- as well as the almost immediate response from Erdogan and AKP supporters- reflect a situation of internal war within Turkey's bourgeoisie. Taking into account the significant geostrategic role of Turkey in the region, we can understand that this intra-bourgeois, intra-capitalist war consists part of broader inter-imperialist contradictions in the Middle East.

The situation in Turkey cannot be explained on the basis of the- nevertheless existing- political rivalry between pro-Islamists (Erdogan) and Kemalist forces; It is a deeper and much more complicated situation. The internal political turmoil in Turkey is interdependent with the imperialist activity in the region- with the ongoing war in Syria and the relations of the Turkish government with foreign powers such as the US, NATO, Russia, the EU, ISIS etc.


The Turkish people- the working class of Turkey, the low-income masses of the country- are between Scylla and Charybdis. Both Tayip Erdogan's establishment and the Coup's perpetrators consist the two sides of the same coin. They both express sectors of Turkey's ruling bourgeois-class which antagonize each other for more authority, more profits and more exploitation against the country's working people. On this framework, both sides (Erdogan and his rivals) try to manipulate the masses and to entrap the Turkish people in a struggle under false flags.

The working class of Turkey must not be entrapped in this intra-bourgeois war. On the contrary, as the Communist Party, Turkey (KP) pointed outin it's statement, the Turkish people must organise their own struggle, the people's struggle. The true liberation from exploitation and oppression is only in the hands of the people- they will have the last word.