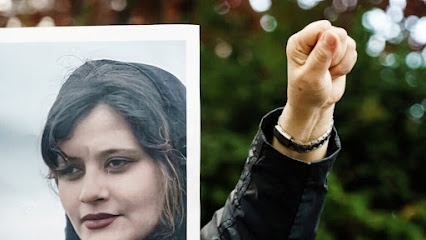 Statement by the Tudeh Party of Iran on the widespread protests in the country, following the death of a 22 year-old woman, Mahsa Amini:

On 28 June 2022, Ali Khamenei broadcasted a message on social media designed to intimidate the people [of Iran] and brazenly defend the murderous crimes of the regime during the 1980s - threatening to have them repeated in the current conditions, stating," The God of the 1980s is the same God as this year's!". This is a clear sign of the [veteran] dictator's concerns about the regime's critical situation.

In recent months [especially since May], we have witnessed the increased brutal repression and violence of the dictatorship's thugs against the people of our country, especially against women who have had enough of the inhumane and medieval policies of the regime. In recent days, we bore witness to the latest murderous atrocity by the Supreme Leader’s mercenaries. Mahsa (Zhina) Amini, a 22-year-old woman from the city of Saqqez [in western Iran] who had travelled to the capital, Tehran, on a family visit, was arrested on Tuesday 13 September at a Metro station in Tehran on the alleged grounds that she was not wearing a complete ["proper"] hijab by agents of the "Gasht-e Ershad" ["Guidance Patrol" a.k.a "morality police"]. She was then taken to one of the detention centres of this organisation on Vozara Street, Tehran. According to the various reports, a few hours later, Ms. Amini was transferred to the intensive care unit of Kasra Hospital in a critical condition. She was pronounced dead on Friday 16 September.

According to a report by the Human Rights Activists News Agency (HRANA), security officers transferred Ms. Amini to the morality police detention centre (Vozara) having told her brother that she would be released once she had attended the mandatory one-hour "re-education/orientation" session [to atone for her alleged indiscretion]. However, Ms. Amini was allegedly beaten while in detention and, after a few hours (causing delay in urgently needed medical treatment), was then transferred from the detention centre to Tehran's Kasra Hospital. Those who were leaving the detention centre described Ms. Amini's transfer to the hospital coinciding with a sudden change inthe mood and an extremely tense atmosphere thereafter. Security forces then began to use violence and pepper spray on the worried family members of the detainees who were gathering outside the detention centre.

There have been several reports of further significant gatherings, especially of women protesters, outside Kasra Hospital. The news of this horrendous crime has strongly reverberated throughout Iran, and the statements issued by popular organisations and prominent figures inside the country serve to underline the broad dimensions of people's outrage. Ms. Amini's body was buried this morning in her hometown (Saqqez) in the midst of a large gathering of people chanting slogans such as "Down with the dictator!". On her temporary tombstone, it simply reads: "Dear Zhina, you will not die, your name will become our symbol [of resistance]".

The tragic death of Mahsa Amini at the hands of the criminals of the Islamic Republic of Iran, took place while our people were commemorating the "National Catastrophe" of 1988 [the massacre of thousands of political prisoners by the regime] committed by murderers such as Ebrahim Raisi [the current president]. Once more, this case clearly shows that, for as long as the current illegitimate and unpopular regime remains in power, there can be no hope for an end to the tyranny and the violent and bloody repression of people's rights and freedoms.
While condemning this latest horrific crime committed by the Islamic Republic of Iran, the Tudeh Party of Iran reiterates its call upon all progressive and freedom-loving forces of Iran, and the world, to form a coordinated and widespread protest against the crimes of the theocratic regime of the Supreme Leader. Suffice to state, the Islamic Republic regime is beyond any reform, and we must therefore strengthen, widen, and coordinate the popular struggles to pave the way for a decisive end to this catastrophe and move towards the establishment of a national and democratic government.