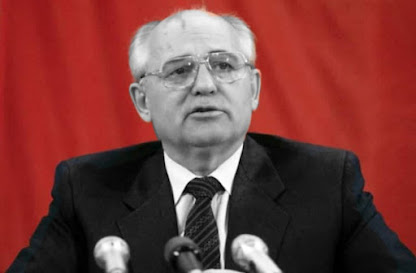 "My ambition was to liquidate communism, the dictatorship over all the people. I found friends that had the same thoughts as I in Yakovlev and Shevernadze, they all deserve to be thanked for the break-up of the USSR and the defeat of Communism”

Mikhail Gorbachev, the last leader of the Soviet Union, the man who betrayed the dreams and expectations of his own people, has died at 91. His biological death bears little importance. In fact, in the consciousness and hearts of the working class people all over the world Gorbachev had died a long time ago, when he consciously decided to become the gravedigger of the first socialist state in human history, the Soviet Union.

Gorbachev didn't actually die yesterday. He died when he led the counterrevolutionary process of Perestroika thus signing the death certificate of the great socialist homeland of the heroic Bolsheviks, the homeland of Lenin, Stalin, Zhukov, Gagarin, Shostakovitch, the homeland of the millions of men and women who devoted their lives in the construction of a new society.

Mikhail Gorbachev wasn't the inventor of the counterrevolutionary process in the Soviet Union; the beginning of this process goes back to the 1950s when the 20th Congress of the CPSU adopted a set of opportunist and revisionist policies that opened the Pandora's box. However, Gorbachev did everything he could do in order to irreversibly accelerate the degeneration of the soviet socialist system and the dissolution of the USSR. By the 27th CPSU Congress in 1986 the treacherous counterrevolutionary elements had already the upper hand in the Party's leadership.

Alongside other members of the counterrevolutionary gang within the Communist Party (Shevardnadze, Yakovlev, Yeltsin, etc.) he deceived the Soviet people by promising the revitalization of socialism but, in practice, his leadership launched revisionist and reactionary reforms that paved the way for the legitimation of capitalist economic relations and the weakening of Central Planning. Perestroika was nothing more than the Trojan Horse of the counterrevolution.

Following the dissolution of the USSR and the restoration of capitalism, Gorbachev  was praised by the bourgeois classes and the imperialists who acknowledged his valuable services. Like a shameless modern Judas he became a celebrity among capitalists and received, instead of thirty pieces of silver, numerous honorary awards for his crucial contribution in the overthrow of socialism.

In 2000, during an interview in Turkey Gorbachev himself cynically admitted the truth: “My ambition was to liquidate communism, the dictatorship over all the people. Supporting me and urging me on in this mission was my wife, who was of this opinion long before I was. I knew that I could only do this if I was the leading functionary. In this my wife urged me to climb to the top post. While I actually became acquainted with the West, my mind was made up forever. I decided that I must destroy the whole apparatus of the CPSU and the USSR. Also, I must do this in all of the other socialist countries. My ideal is the path of social democracy. Only this system shall benefit all the people. This quest I decided I must fulfil. I found friends that had the same thoughts as I in Yakovlev and Shevernadze, they all deserve to be thanked for the break-up of the USSR and the defeat of Communism”.

Apparently this miserable traitor had been dominated by the delusion that he could put a permanent end to the progress of history. Indeed, he and his counterrevolutionary accomplices succeeded in putting the brakes to the 74 year old process of socialist construction in the USSR. The red flag with the sickle and hammer was lowered from the Kremlin in 1991, but it was never erased from the minds and hearts of the communists throughout the world. Gorbachev and his folks failed to erase the legacy of the Great October Socialist Revolution, the epopee of the Great Anti Fascist Victory, the enormous social achievements of the Soviet Union, the internationalist solidarity and the colossal contribution of the 20th century socialism in humanity. They failed to write the end of history.

After all, it is history herself that has definitely and irrevocably decided on this despicable traitor, saving for him a permanent place in its darkest chapters.