PAME National Congress on June 18-19: Hope lies in our Struggles, Our weapon is Solidarity 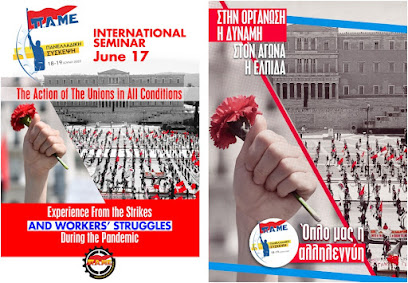 Greece's trade union powerhouse PAME, the All-Workers Militant Front, which unifies and have among its members the most active, fighting forces of the trade union movement, organizes its National Congress on June 18-19 in Piraeus.

On Friday 17th June, an international seminar under the title "The Action of The Unions in All Condition" will take place in Athens.

Below you can read the official statement of PAME:

Our Power is in Organization

Hope lies in our Struggles

Our weapon is Solidarity

The National Federations, the Regional Trade Union Centers, the dozens of unions of the private and public sector, the struggle committees, the hundreds of trade unionists that rally with PAME, we organize a national meeting of trade unions and trade unionists in order to discuss the reconstruction, the orientation and the perspective of the workers’ movement.

How to strengthen the organization of workers in unions. How we will forward the revival and counterattack of the unions, with new forces, with greater momentum and determination in order to defend the rights and to expand the conquests of the workers.

What movement is needed today to face the onslaught of government and business groups, the new sufferings that await our people from the imperialist war, the intensity of exploitation and the rise of poverty, the intensification of the attack on labor rights, the escalation of state repression and employer’s violence.

IN THE CONGRESS OF PAME WILL TAKE PART

All the unions and every trade unionist, the National Federations, the Regional Trade Union Centersthat we met in the big strikes, in the sectoral struggles, in the struggles for collective agreements, against the dismissals and for the right to work, to those who do not compromise with injustice. Those who refuse to submit to a future of poverty, exploitation and war.

Those who are anxious and worried about the future of the workers’ movement, they do not reconcile themselves with the line of submission, compromise, “social dialogues” and “collaboration”, about how much the workers will lose so as not to affect the profitability of business groups.

NOW IS THE TIME FOR WORKERS TO COUNTERATTACK

The two years of the pandemic revealed even more the real heroes, those who really move the threads of life, struggle and evolution.

The pandemic has come to expose those who try to control for them the development technologies and scientific achievements. Those who seek to restore ideologies around the end of the working class especially in the productive sectors. Those who seek to convince workers that they must sacrifice their health and their lives, their work and their rights, their trade union and individual freedoms so as not to jeopardize the growth of the businesses and their profits.

Against the rotten values ​​of capitalists, of exploitation and repression, the class trade union movement, the unions and the trade unionists that unite in PAME, continued to give battles in the front line and consistently and militantly projected the demands of the workers. They did not obey the calls for submission, they did not say “we will respond later”, but they played a leading role in the organization and the militant resistance of the workers to defend their rights.

The May Day 2020 rally and the rally on November 17, 2020, for the Polytechnic Uprising, the enormous river of condemnation of the Golden Dawn outside the Athens Court of Appeals on October 7, proved the unlimited potential and strength of the workers organized in their unions. They highlighted the decisive and leading role of PAME in the organization and unity of the workers’ struggle, in the unrelenting class struggle against poverty, misery, repression, exploitation.

Movement of overthrow and counterattack for work and life with rights

Today we are again called upon to pay with new sacrifices the consequences of the war. But we are more experienced! We need to be more prepared in the new attack that is evolving, so that we do not pay with new adventures the profits of business groups, so that our own needs come to the fore.

Legislated-frozen wages with prime ministerial increases that do not even halve the rapid rise in inflation, are putting thousands of working-class families at a dead end. While at the same time we pay billions for NATO armaments unrelated to our country’s defense needs.

It is necessary to intensify the demanding struggle for:

Restoration resumption of the collective bargaining of the National Collective Contract as a starting point for the increase of the minimum wage, claiming 825€ lower gross wage increases in wages and pensions above the level of inflation, to meet all our modern needs

abolition of all taxes on electricity and gas, on basic goods,

Today we cannot watch with neutrality the war slaughterhouses that are getting stronger in Ukraine nor to stand with one or the other murderer in seizing the wealth of the peoples.

It is not modern and realistic to compromise living with crumbs. We cannot accept as a fait accompli the criminalization of trade union action and the abolition of our right to strike, to watch the anti-workers reforms succeed one after the other, to treat as normal development the legislation of the National Collective Contract with prime ministerial sermons, to watch workers’ rights shrinking.

A workers’ union movement that will fight and demand modern working conditions, with increases in wages and pensions, with the expansion of social benefits.

A living movement that will transcend bureaucratic leaderships and processes. With trade unions that will unite workers regardless of employment relationship, will defend the living, collective processes with the active participation of workers, will operate on this base. Unions open and democratic, a pole of rallying for young workers, every worker to see in the action of the unions, his claims, his anxieties, the solidarity of his colleagues.

Counterattack movement and not defeatist and of submission. Trade unions independent of the clutches of employers and their governments, with an open front against them.

A movement that will take the struggle one step further, proposing comprehensive demands that cover the modern popular needs and the possibilities that emerge based on science and technology.

A movement that will be on the side of those who are persecuted, with genuine international solidarity, against the imperialist wars that bring bloodshed to the peoples, create poverty, misery and refugees.

THE SOLUTION IS IN CLASS STRUGGLE

WITH OUR STRUGGLES WE REJECT THE NEW DARK AGES!

The struggles that preceded during the pandemic give us new strength, they become important legacies. They show the perspective, that the power of the workers lies in the organization, in the struggle, in solidarity.

The important struggles in big workplaces, in E-FOOD, COSCO, LARCO, Kavala Oil and Fertilizers of Kavala, the fights that are developed in several sectors for the signing of sectoral Contracts such as the signing of sectoral contracts in Construction Workers and Shipbuilding, the mobilizations of the Healthcare workers and the Teachers, every smaller or larger mobilization that took place we want to become experience and strength in order to multiply the centers of resistance, to embrace more branches and workplaces, to unite in a big river of claim, to count new victories, to contribute to the general uprise of the workers’ union movement.

An important condition in such a course is to close the wound created in the body of workers by the unions controlled by the government-employers. The forces that are in the leadership of GSEE and ADEDY (ETUC members in Greece). They are leaders who want the movement handcuffed, captive to the interests of business groups.

The struggles that developed during the Congresses of the big federations of workers but also in the GSEE itself was not about the correlation and the chairs but about the orientation and the attitude that the unions should have, their release from the control of employers, of adopting the values ​​of competitiveness and class collaboration, the liberation of trade unions from the deadly embrace of the state and employers.

PAME is a conquest of the working class! It is a large rallying of trade unions, National Federations, the Regional Trade Union Centers, struggle committees, trade unionists. From its foundation in 1999, it has been fighting against injustice, employer and state repression, against exploitation and capitalist barbarism.

The power of PAME lies in the vanguard action of the unions and the workers in the branches and in the workplaces where the exploitation is born. It does not stem from bargaining with employers or from standing behind the governments that defend the system of exploitation.

The workers’ union movement is necessary to discuss collectively and in an organized way, to decide its answer against those who wish the end of the unions, their transformation into e-clubs and the replacement of live participation with “likes”, all those who have wished for the end of the strike as a form of struggle, those who try to turn the unions into a tail of governmental change and assigning the struggle to future-government Messiahs.

The growth of PAME with new militant forces, with new unions, is the answer to the intensity of the attack, it is the way out and the hope in the lines of the workers, the fear and the anxiety of our exploiters.