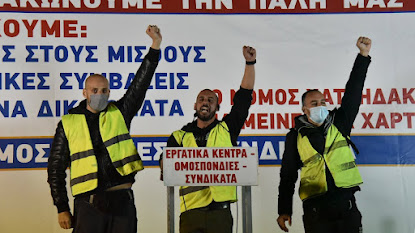 The Union of COSCO workers (ENEDEP) expressed its satisfaction for the victory, thanking all the workers and unions who supported the struggle. The Union will continue the fight for collective labor contracts.

"With our organized struggle, the 7-day strike, and the solidarity expressed by the entire working class, we forced the company to accept most of our demands. Now we have gained experience, we have a strong trade union and we know how to wage the struggle", said ENEDEP president Marios Bekris during a rally with other trade unions in Piraeus.

In a statement, the Communist Party of Greece (KKE) hails the victory of the dockworkers, underlining that their struggle was a struggle for the working class as a whole.

It is reminded that the mobilizations of COSCO workers began after 46 year-old dockworker Dimitris Daglis was killed at pier 2 in Piraeus Port Container station when he was fatally hit by a crane bridge.