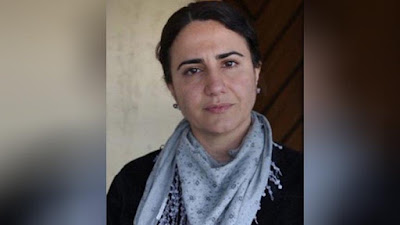 In a message posted on Twitter, the People's Law Bureau announced the death of Ebru Timtik, a lawyer from Turkey who was on the 238th day of death fasting demanding a "fair trial".

Timtik, whose health condition had been deteriorated lately, was held at Dr. Sadi Konuk Training and Research Hospital in Istanbul's Bakırköy.

A member of the Proggerssive Lawyers' Association (ÇHD), Timtik was sentenced to 13 years 6 months in prison for "terrorism-related" offenses following a deeply flawed trial in March 2019. Her partner, also a lawyer-member of ÇHD, Aytaç Ünsal, was jailed for 10 years.

The offenses were solely based on statements by a witness, who later stated that his testimony shouldn't be taken into account due to his mental condition.

The court of appeals, which upheld the lawyers' sentences in October 2019, was revealed to give the verdict without reviewing lawyers' appeal.

Both Timtik and Ünsal were convicted for being politically affiliated with the  banned People’s Revolutionary People’s Liberation Party/Front (DHKP/C). During the much publicized trial, the couple was accused of “communicating the organisation’s messages to captured members and acting as couriers.”

Lawyers and human rights associations and groups from Turkey and around the world have been for months urging the authorities to meet the lawyers' demands. On July, the presidents of nine bar associations in Turkey demanded their immediate release, warning that the case was proceeding too slowly.

The death of Ebru Timtik came as a result of the persistent and blatant human and political rights violation by the bourgeois Turkish state. Last May, Grup Yorum bassist Ibrahim Gokcek died just two days after suspending his 323-days hunger strike. His death followed those of Grup Yorum bandmate Helin Bolek and of Mustafa Kocak in April. All had been accused of DHKP/C membership.