In order to know more about the actual character of the NATO-inspired Prespes Agreement as a tool of promoting the euroatlantic imperialist plans in the Balkan region, check out the following post: Understanding the Macedonia name deal.

Not surprisingly, among those who rushed to congratulate the government of SYRIZA for the ratification of the agreement were:

"I welcome today’s ratification in the Greek parliament of the Prespa Agreement, an important contribution to the stability and prosperity of the whole region. I look forward to the future Republic of North Macedonia joining NATO”.

"The United States welcomes the decision by Greece’s Parliament to ratify the Prespa Agreement. The leaders of Greece demonstrated vision, courage, and persistence in their pursuit of a solution to the name dispute, which will allow the future Republic of North Macedonia to take its rightful place in NATO and the EU. The United States applauds this historic opportunity to advance stability, security, and prosperity throughout the region".

- EU officials, including the President of the European Commission Jean-Claude Juncker and High Representative of EU Federica Mogherini

"We warmly welcome the next crucial step in the ratification of the Prespa agreement, taken with today’s vote by the Hellenic Parliament. From the very beginning, the European Union has strongly supported the historic agreement signed by Prime Ministers Tsipras and Zaev, following negotiations under the auspices of the UN. It took political courage, leadership and responsibility on all sides to resolve one of the most entrenched disputes in the region. Both countries have seized this unique opportunity which sets an example of reconciliation for Europe as a whole and will give a further boost to the European perspective of the region".

“I welcome the vote on the Prespa agreement. That is an example of courage and unity for Europe”.

However, except from the imperialists who have every reason to be pleased for the Prespes Agreement and the prospect of "North Macedonia's" membership in NATO and the EU, the ratification of the Tsipras-Zaev deal was also praised by the leadership of the "European United Left-Nordic Green Left" (GUE/NGL), the political group in the European Parliament in which SYRIZA has played a leading role.

The president of GUE/NGL Gabi Zimmer (MEP for the German Die Linke party), wrote on twitter: 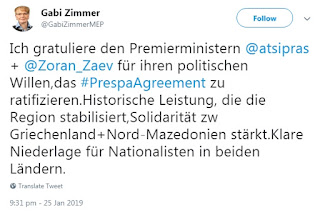 "I congratulate Prime Minister Tsipras and Zaev for their political will to ratify the Prespa Agreement. A Historical achievement that stabilizes the region and strengthens solidarity between Greece and Northern Macedonia. A clear defeat for nationalists in both countries".

Apparently, the leader of GUE/NGL has nothing to say about the fact that this agreement opens the door for the further expansion of the US and NATO in the Balkans.

The "leftists" of GUE/NGL, the ones who participate every year in European Parliament's anti-communist celebration of "Sakharov Prizes", are also silent about the fact that the Prespes Agreement preserves the seeds of irrendentism and nationalism in both sides of the borders, as long as it refers to "Macedonian citizens" and "Macedonian language".

Once again, the opportunists and pseudo-socialists of GUE/NGL show their true political identity as stooges of imperialism, fully integrated into the capitalist system. Despite the hypocritical declarations about "anti-fascism and "anti-imperialism", the GUE/NGL group has been proved a valuable supporter of the EU and NATO alliances, misleading the working masses about a supposed  pro-workers "humane capitalism" and a "better EU".