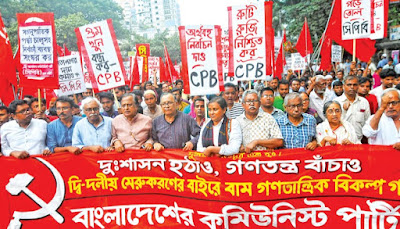 The Communist Party of Bangladesh (CPB) has denounced the 11th Parliamentary elections as a fake election with fake ballots. People will reject this election and the pre-determined result.
CPB President Comrade Mujahidul Islam Selim and General Secretary Comrade Shah Alam said in a briefing on 30th December, 2018 that for ensuring a false victory the ruling AL led government made the blueprint of mockery and electoral fraud much earlier than the election day . They also claimed that the government has destroyed  the minimum basis of democracy in this election.
They said, "This is a fake election. Those who have been declared MPs are fake public representatives. The government had created fear and intimidation from the very beginning through violent attack on opposition candidates and activists and spread several rumors among ordinary people. They also used the Election Commission and the govtadministration as their tools to hold a unilateral election."


The leaders said, "One hour after starting the polls, specific information from several places said that votes were casted on the night before in most of the centers. Agents of the opposition parties were forced to leave the voting centers, voters were also threatened. Candidates of CPB and the left alliance are facing several attacks and they are not free to move across their respective constituencies. Supporters are hindered to cast their votes."
The added, "Such hundreds allegations have been submitted to the Election Commission. Police and the ruling party cadres attacked the voters. Even many candidates and the chief election agents of the opposition parties could not escape the attack. This ridiculous election will never be acceptable. People will reject the pre-determined result of this election."
Along with CPB the Left Democratic Alliance of Bangladesh also condemned this farcical election and demanded fresh poll under a neutral caretaker government.
Communist Party of Bangladesh
Central Committee.
Solidnet.