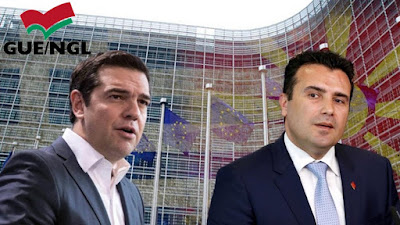 It must be noted that the GUE/NGL, alongside the Europarliament's Social Democrats and Greens, have also proposed Tsipras and Zaev as potential candidates for the... Nobel Peace Prize. On this occasion, we publish the statement of the delegation of the Communist Party of Greece (KKE) in the EU Parliament which points out the following (from inter.kke.gr):


"The joint statement of the heads of the Social-democrats, Greens and so-called Left Group (GUE/NGL) in the European Parliament, Udo Bullmann, Ska Keller and Gabi Zimmer, through which they propose Tsipras and Zaev for the Nobel Peace Prize because they pushed forward the EU-NATO Prespes Agreement is a massive provocation against the people.

In any case, this prize has been given in past for their services in the promotion of imperialist plans to US Presidents and Secretaries of State, such as Kissinger and Obama who pushed forwards every kind of imperialist intervention, bombardments and coups. The prize has also been awarded to Walesa, Gorbachev, known for their dirty role in the counterrevolutions.

The head of GUE/NGL, Zimmer (cadre of the German Die Linke party) in cooperation with the political groups of the "Socialists and Democrats" and "Greens" went as far as recognizing this anti-people agreement as a "historic achievement" that puts FYROM in the camp of the EU and NATO, while it includes the dangerous seeds of irredentism.

But, however much the forces of old and new social-democracy attempt to place the halo of "peace and progress" on NATO, the USA, the EU, their efforts are in vain..because their longstanding crimes, the slaughter of the peoples, dictatorships, wars, their open imperialist interventions for the interests of the monopolies are indelibly engraved in the memory and consciousness of the people.

As for the stance of GUE/NGL, it does not surprise us. It is an apologist for the EU that undertakes the job of prettifying it. It supports its anti-people governments, such as that of SYRIZA of the memoranda and the whitewashing of US imperialism in Greece, the governments of Spain and Portugal, legitimizing capitalist exploitation.

The peoples have a lot of experience and can reject the false dilemma between progress and the far right which is another reactionary tool of the system.

A progressive policy is what serves the just cause of the working class, the class struggle. Because this is the motor force of social development, the struggle for the overthrow of capitalist power as a precondition for disengagement from the EU, with the people holding the reins of power.

The real dilemma in the impending European Elections from the standpoint of the people and their interests is the following: will we continue along the same path, which demonstrably brings new problems and torments or will we counterattack in a mass and combative way everywhere, so that this rotten exploitative system is overthrown?"