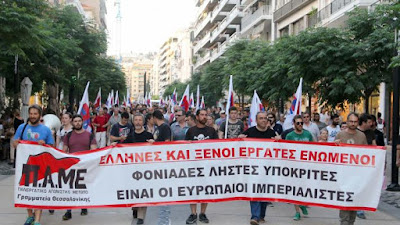 In a statement regarding the World Refugee Day, the Secretariat for Refugees and Immigrants of the All-Workers Militant Front (PAME) expresses support and substantial solidarity with the refugees:
The sharpening of the competitions for business group profits, the exploitation and the imperialist interventions have resulted in millions of uprooted and persecuted people around the world, the increase in 2018 of arrivals of refugees in our country. Thousands of them are trapped under outrageous conditions, stacked in the Reception and Identification Centers.
The SYRIZA-ANEL government, with the support of the other parties, too, aiming at the so-called geostrategic upgrading, engages our country in dangerous imperialist plans where it is actively participating, as well as in their crimes against the peoples, transforming the country into a NATO-US-EU military camp-base.

With the EU's decisions, which the Greek government also co-signs, the rights of the refugees are being violated, the situation is being aggravated and they lead to an increase in numbers and in despairing for the trapped people who managed to escape from their bombs, from the heat of the war.

In this direction, also, was recently the incorporation by the government the of EU directives on geographic constraints and the pause of the "material reception conditions" for those who violate it, for deportations to be made even before the administrative courts.
Similarly, in other EU Member States, new measures are being taken against refugees and immigrants. From the stopcocks of the business groups and their governments, they will only pass through those who are needed as cheap working force. The victims of their barbaric policy will be dealt with by enforcing repression even for children and cases of family reunification, on-site refoulements, with fences and closed ports.
PAME expresses its solidarity and substantial support for refugees, it demands that they be transported from the islands to the mainland of Greece, and there, to submit an asylum application with the prospect of their direct release and safe transportation to the countries of their actual destination.
It calls on refugees and immigrants to organize and jointly fight together with the Greek workers against exploiters, imperialist associations and their governments, those responsible for their uprooting and the anti-workers barbarism in our country. It calls in a joint struggle for work with rights, against imperialist wars and interventions. For a world without exploitation, wars, refugees. 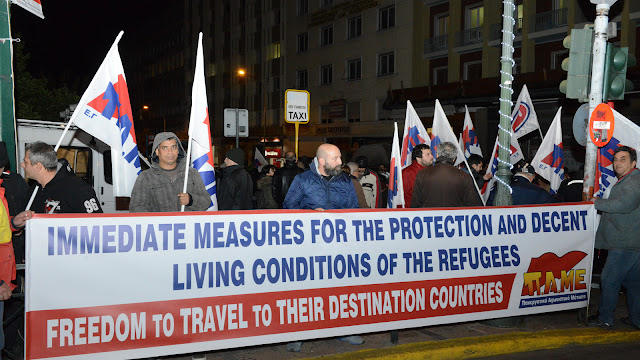 WE DEMAND:
• Release refugees and immigrants from the Aegean islands and the country. Facilitate their safe transportation to countries of their actual destination.
• Overturn the EU and government decisions that entrap refugees in Greece.
• Open-air temporary accommodation for refugees and immigrants, with human conditions of housing, food, medical care.
• It is the responsibility of the state to take all necessary measures to ensure that the children of the refugees feel as if they live, as far as possible, under normal conditions.
• No to new repression measures from EU and Member States against refugees.
• Disengagement of Greece from the imperialist plans. No involvement in imperialist interventions and wars. No change of borders. Close all military facilities. NATO out of the Aegean Sea and the Balkans.
• Reestablishment of the National Collective Labour Agreement. No worker with a salary below 751 euros.
• Signing of Collective Labour Agreements with increases in salaries and wages.
• Protection measures, conditions of health and safety in workplaces.
• Abolition of labour-slavery offices, laws that promote and strengthen flexible working relations.
• Abolish all anti-workers’ laws and measures of the memorandums.
• No to the hatred of nationalists. We isolate the criminals, murderers, the Golden Dawn Nazis.
PAME.