“A terrible bazaar against uprooted refugees and immigrants”; that is how the Communist Party of Greece characterizes the recent EU Migration Summit. In a statement, among other things, the KKE points out that “the dangerous decisions are summarized into more entrapment of refugees and immigrants in Greece, more repression, deportations and attack in the rights of immigrants and refugees, countries-”storehouses” of immigrants, greater penetration of european monopolies in third countries in the name of immigration limitation”.

“The decision to “voluntarily” establish “controlled centers”, that is detention centers, where rescued refugees and immigrants will be transported, is the reproduction and worse development of the unacceptable hotspots that exists in Greece's islands”.

“The approach towards the so-called “secondary movements”, in simple Greek, means even more strict implementation of the Dublin Regulation and “returns” to Greece of refugees and migrants who moved to other EU countries. Moreover, through the encouragement for “close cooperation” among member states, the decision “opens the window” for signing bilateral of multilateral agreements that will secure it. An indication of that is the Prime Minister's statement that the government is willing to sign a bilateral agreement with Germany on fast-track “returns” to Greece of asylum seekers who were found in Germany, as the Dublin regulation indicates.

The KKE statement also writes: “The direction for the creation of “disembarkation platforms” for immigrants in third countries, combined with the decision to pay the second installment of 3 billion euros to Turkey and 500 million euros to Africa, in general to increase the private investment in Africa, consist a comprehensive plan of political and economic interference project in third coutries that is developing on the occasion of immigration, also on the basis of EU's competition with other imperialist centers”. 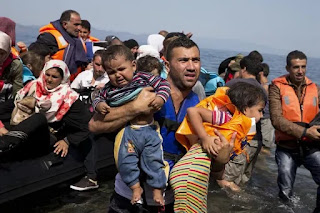 “The statements of satisfaction made by the Prime Ministers, both of the Visegrad group of countries and the nationalists as well as from the “cosmopolitans”, smashed the myth about EU's division between “darkness and repression” on the one hand and solidarity on the other. Despite any contradictions, the EU is one and becomes even more reactionary and hostile for the people” writes the Communist Party's statement.

The KKE slams the Greek government, characterizing its position as “provocative and hostile to the interests of both the Greek people and the immigrants and refugees”, pointing out that “once again, [the government] voted all the antipeople decisions of the Summit, including the most strict implementation of the EU-Turkey agreement” and that “at the same time, it is deeply into all imperialist plans and has turned the country into a base for the imperialist interventions in the region which cause mass uprooting and immigration”.