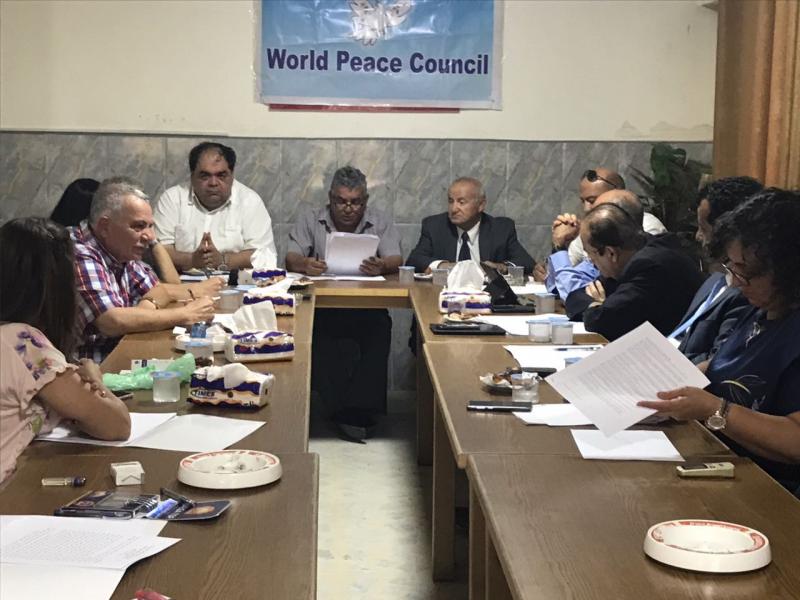 
The participants discussed the explosive situation in the Middle East and North Africa, the imperialist plans and interventions, the dangers of imperialist aggression and the responsibilities of the governments of the region who are supporting the US-NATO and European Union plans.
Written messages from the Peace movements of Iran, Cyprus, Turkey, Egypt and Syria were read out at the meeting. The WPC was represented by Iraklis Tsavdaridis, Executive Secretary of the WPC.
Special mention was made of the situation in Palestine, where the Israeli occupation regime continues the slow genocide of a people who has been fighting for 70 years for the inalienable right to an independent state, but also about the Syrian people who have been facing a huge imperialist operation and intervention for seven years having as tool local and foreign armed mercenaries from 80 countries with the support of the USA and the EU. As well as regional allies such as Turkey, Saudi Arabia and the other reactionary regimes of the Persian Gulf.
A special debate was held on the situation in Yemen where one of the biggest humanitarian crises is taking place, with hundreds of thousands dead, with hunger and cholera epidemics as a result of the bombing by Saudi Arabia and its allies for one year.
The Middle East meeting of the WPC condemned the US decision to transfer their embassy to Jerusalem, which is a provocation and strengthens the plans for the "judaization" the city and Israel itself while actually promoting an Apartheid regime. Solidarity with the anti-imperialist and peace-loving forces that are acting in very difficult conditions within Israel on the side of the Palestinian and Syrian people has been expressed likewise.
The position of the WPC to end the Israeli occupation in the Palestinian territories and the creation and recognition of an independent state of Palestine at the borders before June 4, 1967, with East Jerusalem capital, was reaffirmed, while condemning the hypocrisy and complicity of governments that supposedly support Palestine while in practice they are accomplices in the ongoing crime against the Palestinian people.
The participants denounced the invasion and occupation of the northern part of Syria by the Turkish army, pointing to the dangers of division of Syria into spheres of influence and protectorates. There was a strong concern about the large concentration of military forces and weapon systems across the region, which, in the background of intense competition, raises the dangers of a generalized imperialist conflict.
The meeting condemned the plans to manipulate the peoples on the basis of ethnic, racial, religious and other pretentious division, aimed at concealing the real causes of misery and wars, which are the control of energy sources and roads, markets and profits for large monopolies and multinational companies, as part of a plan for the new "Greater Middle East," which includes border changes, violent change of governments according to the will of the imperialists. Millions of refugees are the "colltaeral loss " for which hypocritical tears are poured out by those who are essentially responsible for it.
Concerning Iran, the condemnation of the unilateral withdrawal of the US from the "nuclear agreement" and the aggressive plans of the US and Israeli governments that have been strengthened, have been voiced. In this light, the meeting underlined that the WPC does not accept any pretext or excuse for political or military intervention or sanctions against Iran, while expressing solidarity with the progressive and peace loving forces in Iran in their struggle for people’s, workers' and democratic rights.

On the sideline of the regional meeting, a meeting was held with the Jordanian Communist Party where Omar Awad, member of the Party's Political Bureau, informed about the country’s situation and recent massive popular protests and rallies, which dealt with serious economic, social and political issues in the background of the capitalist crisis, in which the Jordanian Communist Party (JCP)and its youth have played a leading role in coping with government brutality and the mechanisms of repression. The JCP expressed its positions of principle about the solidarity with the Palestinian and Syrian peoples and the condemnation of the government policy which is in line with US plans in the region. The delegation Jordanian CP informed about their opposition to government plans to re-engage the country on World Bank and International Monetary Fund gears, but also on the role of the "Muslim Brotherhood" in the country, used in various ways both as instrument of fear and as an alibi for imposing anti-peoples measures and authoritarianism.
Source: World Peace Council.