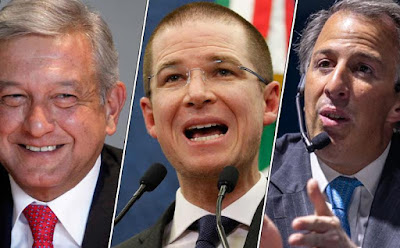 In these elections there are three major coalitions which include bourgeois parties of both social democratic and neoliberal political orientations. The candidate who has been presented by many mass media as a potential winner of the elections is Andres Manuel Lopez Obrador - also known as AMLO- who is running for the “Together We Will Make History” coalition and is leading the latest polls with an average of at least 46.3% of effective voter intention among likely voters. A former mayor of Mexico City, AMLO has run for the presidency twice and is widely regarded as the "left-wing" candidate in these elections.


The candidate for the “For Mexico at the Front” coalition, led by the conservative National Action Party (PAN) is Ricardo Anaya. The 39 year-old lawyer and political scientist, is polling in second place with approximately 27% of support from likely voters in the latest round of polls. As part of his economic program, Anaya has called for the creation of a specialized unit to promote public-private alliances, an increase in public investments, and a reduction of the number of public servants.

Candidate for the “Everyone for Mexico” coalition formed by the PRI, the Green Party, and New Alliance, Jose Antonio Meade is currently polling in third place with approximately 23.3% of support on average in the latest round of polls. He has served as minister in the Felipe Calderon and Enrique Peña Nieto administrations, being Mexico’s foreign minister, social development minister, and finance minister.

Jaime Rodriguez Calderon, known as El Bronco, is an independent candidate who has been a national and local legislator in the state of Nuevo Leon. In recent polls he receives no more than 4% of the votes.

After decades of harsh neoliberal policies, there are many who point out to Obrador (AMLO) as a potential pro-people choice. Calling himself a leftist, AMLO has promised to take a different approach on security and stop further privatizations, which has earned him the support of a significant part of society fed up with the mainstream parties.

With a social democratic program which does not consist a threat for the capitalist establishment, AMLO has no differences from the respective social democratic powers in Europe, like SYRIZA in Greece, Podemos in Spain or Jeremy Corbyn's Labour Party in Britain. It is characteristic that powerful monopoly groups in Mexico and abroad (e.g. Azteca, Grupo Gruma, Monsanto, Open Society, etc) support the candidacy of AMLO.

Despite his leftist image, AMLO is another bourgeois politician who is committed to the management of the rotten capitalist system. In a recent interview with TV Azteca, AMLO said that the source of inequality is neither the accumulation of wealth nor the exploitation of the worker, but corruption! This view is a straightforward rejection of the most fundamental marxist principle on economy and society. 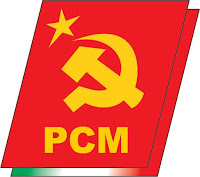 Within this context, the Communist Party of Mexico (Partido Comunista de Mexico) has called the people to abstain from elections, pointing out that the current electoral battle is a game between bourgeois forces. In an interesting article titled "Whoever wins, workers lose", the General Secretary of the Party Pável Blanco Cabrera has analyzed the major aspects of the elections, writing among other things that "the problem of the workers in Mexico is capitalism and Obrador does not propose to end it, but to strengthen it". There is no one to vote, writes Cabrera and adds: "but there is also the need for more intervention, debate, action and organization".

The Communist Party of Mexico calls the working people to reject the candidates and organize their struggle for the overthrow of the capitalist system, for the construction of socialism as the only way out.