During the last years the anti-communist distortion of history in the Baltic countries has become an official policy. The EU and the USA support the attempt to historically rehabilitate and vindicate the fascists in the Baltic states (Estonia, Latvia, Lithuania), as well as in Ukraine, who during the 2nd World War aligned with the Nazis. They have labeled them “militants for democracy” because they fought against the heroic Red Army and the Soviet Union.


While the fascist crimes of the SS legions and other similar organizations are well-known, they present them to the younger generations as “patriots” and “democrats”, organizing ceremonies in order to honor them! The official propaganda in the Baltic countries has reached the point of presenting the concentration camps as “reformatory centres”.

A recent example of deliberate distortion of history and open anti-communism was demonstrated by the former President of Estonia Toomas Hendrik Ilves. In his personal twitter account, Ilves commented on a tweet made by the Russian Embassy in the USA which was referring to the anniversary of "Operation Barbarossa", the beginning of Nazi Germany's attack against the Soviet Union. 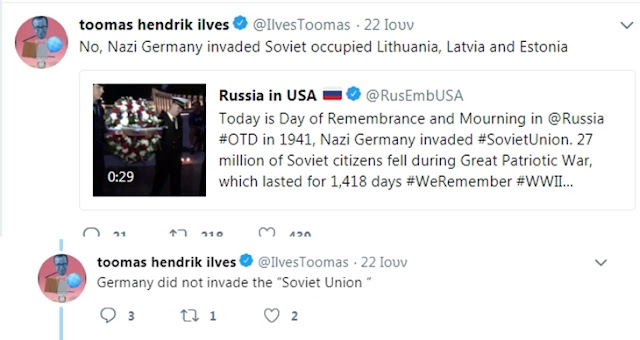 The ex-president wrote: "No, Nazi Germany invaded Soviet occupied Lithuania, Latvia and Estonia". In another comment below, responding to a twitter user, Toomas Hendrik Ilves repeats the same argument: "Germany did not invade the "Soviet Union"".

The ex-president of Estonia (a former member of the Estonian Social Democratic Party) repeats the known anti-communist, historically distorted version of WW2 history that has dominated in the Baltic countries. According to this version, the Baltic countries were "under the occupation" of the Soviet Union. Therefore- they argue- those who aligned with the Nazi-SS forces and fought against the Red Army were fighting for the liberation of these countries from the Soviets. What a convenient apology for Nazism!

Apparently, ex-president Ilves hates everything that reminds the socialist past of his country. He probably detests the Soviet Union and the great social achievements of the working class during the socialist construction in the 20th century. However, at least, he should respect the 27 million Soviets, soldiers and civilians, who died for the defense of their country in the war against the Nazi monster.

Toomas Hendrik Ilves and his like-minded partners in the EU and the USA can try as many times as they want to distort history. What is certain is that they will ultimate fail. History has been written. 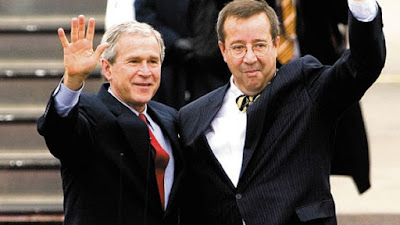