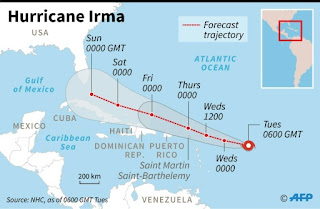 An Alarm Phase is declared for the provinces of Villa Clara, Sancti Spíritus, Cienfuegos and Matanzas; an Alert for Mayabeque, La Habana and Artemisa; and the Informative Phase for Pinar del Río, as of 10:00am. Other provinces remain in the Alarm Phase. Residents of the Isle of Youth are to remain attentive to information released.

According to information from the Meteorology Institute’s Forecast Center, Irma continues to be a high intensity system with maximum sustained winds of 250 km/h, at the upper limit of a category 4 hurricane on the Saffir-Simpson scale.


At 6:00am, the eye of the storm was estimated to be located some 168 kilometers north of Punta de Maisí in Guantánamo, and 180 kilometers east-northeast of Punta Lucrecia, Holguín. The storm continues moving northwest at 26 kilometers per hour (km/h), and will continue to do so at a reduced rate, in the same direction, close to the northern coast of the eastern and central regions of the country.
Considering the imminent impact on our territory, the decision was made to declare an Alarm Phase for the provinces of Villa Clara, Sancti Spíritus, Cienfuegos and Matanzas; an Alert for Mayabeque, La Habana and Artemisa; and the Informative Phase for Pinar del Río, as of 10:00am. Other provinces remain in the Alarm Phase. Residents of the Isle of Youth are to remain attentive to information released.
State bodies and organs, economic entities, and social institutions in the provinces now in the Alarm Phase must implement measures established in their respective disaster mitigation plans, limit the movement of persons and means of transportation, as well as other activities which may endanger lives.
The population is urged to stay informed of the evolution of this hurricane via Hurricane Advisories released by the Meteorology Institute, and Civil Defense instructions, adopting, in a disciplined fashion, all measures as indicated by local authorities.
National Civil Defense General Staff.

Work is underway corresponding to each stage of preparations for the impact of Hurricane Irma, especially that relating to protecting the lives of the population.
This Thursday, September 7, saw a meeting of representatives of the strategic Western region of the island in the National Civil Defense Council’s Disaster Command Center to provide information on the possible impact of Hurricane Irma.
The presidents and vice-presidents of the Provincial Civil Defense Councils of Havana, Artemisa, Mayabeque, and Pinar del Río learned that - according to the Institute of Meteorology forecasts - the greatest damages in this region will stem from the impact of strong winds, rain and sea penetration, due to the reach of Irma’s spiral bands, while Irma’s recurve in its passage toward Florida could result in the hurricane affecting this part of the island over an extended period.
The member of the Party Central Committee Political Bureau and Minister of the Revolutionary Armed Forces (FAR), Army Corps General Leopoldo Cintra Frías, stressed the importance of promptly and opportunely informing the population and, if necessary, advancing some of the measures envisaged in other preparation phases.
Major General Ramón Pardo Guerra, chief of the National Civil Defense General Staff, pointed out that the greatest danger stems from the extended period that the meteorological phenomenon could remain close to this region, during which its mass of water and wind will impact on the country.
In response to a query from Granma regarding the measures already being taken in the capital - one of the most vulnerable territories - the Party Political Bureau member, Vice President of the Council of State and First Secretary of the Party in Havana, Mercedes López Acea, noted that work is underway corresponding to each stage of preparations, especially that relating to protecting the lives of the population
Among other measures, López Acea explained that the opening times of local food rations stores have been extended, and efforts are being made to supply local markets and food processing centers, to guarantee certain essential products to the population.
She also outlined the measures to deal with flooding in areas at risk. “Everything will depend on the responsibility with which state agencies in each municipality act, and on the other hand, how the population, in a disciplined manner, responds to the guidelines.”
Also participating in the meeting was the member of the Party Political Bureau, Army Corps General Álvaro López Miera, first deputy minister of the FAR and Chief of the Army General Staff.