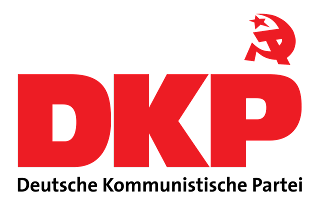 The result of the election represents a shift to the right with all dangers entailed with it. The AfD is a racist, nationalist force, a hinge to the frank Fascists, becoming the third-strongest party in the Bundestag with 13 percents. It is the strongest Party in Saxony and the second strongest in all East Germany. CDU, SPD, Green and Left Party lost voters to the AfD.

The 13 percent of votes for the AfD correlate to the results of the so-called "Sinus" studies, which since the 1980s show that 13 percent of the (West) German population have a "coherent right-wing world view". Accidentally or not? Anyway, the "submarine" named "Neo-fascism", once in the sixties in the form of the NPD, unignorable came out again.

The election results of CDU and SPD are on the lowest level ever. The traditional social-democracy is in a deep crisis. The FDP was able to establish itself again with those who are on the winners' side of redistribution from the bottom up. The Greens maintained their results. “Die Linke” has achieved a small plus, but its loss of votes and meaning in its former home countries - on the territory of the GDR - continues. It lost about 500,000 votes to the AfD. The much too early self-determination on an alliance with the SPD and the Greens without clarification of the "red lines" or the most important essentials of such an alliance promoted the loss of profile and reputation, especially in the political conscious left-wing electoral potential.

If a coalition of CDU, FDP and Greens actually is going to form the government, this will, above all under the the pressure from the right by the AFD, be an intensification of the aggressive, social-mossback course of German imperialism.

The SPD, which is with Agenda 2010 and Hartz-IV responsible for the social descent of masses and enabled the deployments of wars of German imperialism, gives no reason of hope for a real opposition policy. At least not for an opposition policy against war and social cutting, as urgently needed.

The result of the election expresses, above all, the great inconsistency in mass consciousness, but also in class consciousness. Many people, especially in the deindustrialized eastern parts of Germany, are rightly concerned about their social perspective and the security of their life situation. This uncertainty has brought non-voters back to the polls. They wanted to reject the policy of the great coalition of the CDU and the SPD. They have refused this policy. They believed in the false and demagogic promises and slogans. By choosing the AfD, which makes no secret of the fact that it stands for a social-reactionary, splittic, racist course, they chose a "way out", which will soon be directed against themselves.

The left forces in Germany were not able to give convincing answers to the legitimate perspectives of fear. We remain at the same time on the position that perspectives of fear are not racism, but can become the breeding ground for racism if there are no comprehensible paths for successful struggles for peace, social rights and democracy. This requirement results for all the left from this election result. 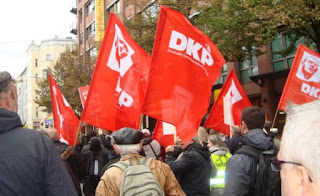 The result of the DKP with 11,713 votes is very low and not satisfying for us. It is also the receipt for the fact that we did not take part in a Bundestag election campaign on our own since 1989. Our run on the Bundestag election was right, not because we were hoping for election returns, but because we strengthened the DKP and made its substances more well-known. We have carried "red on the road" and will continue to do so. In the medium and long term, this is the right way to change mass and class consciousness and link it to the right opponent.

The DKP will therefore continue to be on the road with its action program for peace, work, solidarity, and show where the money for education and a health care system that does not make the patient and the employee sick is to take from: from the military budget and the super rich. It will continue to fight for disarmament, the end of all foreign operations of the Bundeswehr and for peace with Russia. It will continue to fight for the reduction of working hours with full pay and staff compensation and job creation in the public sector.

The DKP will continue to name monopoly capital as the main antagonist and call for joint struggle - knowing that change will be achieved on the road and not with the ballot. Let‘s fight for common interests regardless of worldview, age, origin, and gender - in short, solidarity - is what the rulers are most afraid of. Solidarity is our asset - on strike, the prevention of a foreclosure in the neighborhood or a blockade of neo-fascist demonstration. Solidarity is also our asset to the AfD.