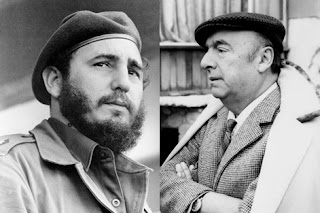 
Fidel, Fidel, the people are grateful
for words in action and deeds that sing,
that is why I bring from far
a cup of my country’s wine:
it is the blood of a subterranean people
that from the shadows reaches your throat,
they are miners who have lived for centuries
extracting fire from the frozen land.

They go beneath the sea for coal
but on returning they are like ghosts:
they grew accustomed to eternal night,
the working-day light was robbed from them,
nevertheless here is the cup
of so much suffering and distances:
the happiness of imprisoned men
possessed by darkness and illusions
who from the inside of mines perceive
the arrival of spring and its fragrances
because they know that Man is struggling

to reach the amplest clarity.

And Cuba is seen by the Southern miners,
the lonely sons of la pampa,
the shepherds of cold in Patagonia,
the fathers of tin and silver,
the ones who marry cordilleras
extract the copper from Chuquicamata,
men hidden in buses
in populations of pure nostalgia,
women of the fields and workshops,
children who cried away their childhoods:
this is the cup, take it, Fidel.

It is full of so much hope
that upon drinking you will know your victory
is like the aged wine of my country
made not by one man but by many men
and not by one grape but by many plants:
it is not one drop but many rivers:
not one captain but many battles.

And they support you because you represent
the collective honor of our long struggle,
and if Cuba were to fall we would all fall,
and we would come to lift her,
and if she blooms with flowers
she will flourish with our own nectar.

And if they dare touch Cuba’s
forehead, by your hands liberated,
they will find people’s fists,
we will take out our buried weapons:
blood and pride will come to rescue,
to defend our beloved Cuba.