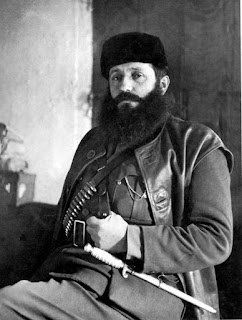 Today is the 71st anniversary of the death of the First Captain of the People's Army (ELAS) Aris Velouchiotis (1905-1945). Velouchiotis was a partisan, member of the Communist Party of Greece (KKE) and guerrilla leader during the Axis occupation in WW2. Aris, who was born in Lamia, central Greece in 1905, was a cadre of the Communist Party of Greece and at the decision of the party he undertook the formation of the People’s Army (ELAS) during the fascist occupation, the armed wing of the National Liberation Front (EAM).

"The KKE did not and has never signed a statement of repentance to the domestic and international bourgeois class. The heroism and sacrifices of communists embrace yesterday and today, constitute and important legacy for the next generations. The CC of the party, all its members and KNE honour the indomitable of the class struggle (…) Aris Velouchiotis became a legend and a leading personality of the people’s movement through the specific collective and ideological structures of the KKE. The KKE from early had ascertained the need for armed resistance against the occupier and correctly supported the armed struggle on a very broad organized political popular basis, through the formation of EAM. The contribution of Aris Velouchiotis in the creation of the first ELAS units, as well as in the formation of the headquarters of ELAS was important.
Aris was in favour of the continuation of the armed struggle after the end of the occupation and the Battle of Athens, something which the KKE realized in the period 1946-1949. All those sworn enemies of the armed class struggle suffer fits at the mention of the Democratic Army of Greece.
Aris was against the Varkiza Agreement and the surrendering of the weapons. The KKE later assessed that these acts were mistakes. All these people praise Varkiza, the disarming of the people’s army, but they attack the essence of the viewpoint of the KKE as if it were the plague.
The opinion of Aris Velouchiotis was not condemned by the KKE, but his persistence in acts which were not in accordance with organizational and operational principles of the party. Aris Velouchiotis did not express another strategic viewpoint from that of the KKE and EAM in this specific historical period. He chose the armed struggle and condemned the Varkiza Agreement. In this he was vindicated and today is not the first time we say this.
The party itself later adopted this position concerning Varkiza and anyone can understand how valuable the contribution of Aris Velouchiotis would have been to the armed popular struggle in the following years 1946-49 if he had held his discipline and not been led to his tragic death (Note: Aris Velouchiotis committed suicide encircled by the bourgeois army).
Aris had the vision and goal of the KKE, the overthrow of capitalism and the construction of socialism. All these people are on the other side. They fought and fight ferociously against the struggle which leads to socialism-communism. All the things for which thousands of heroic men and women of the KKE gave their lives."