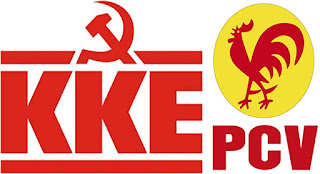 KKE denounces every attempt of intervention in the domestic issues of Venezuela, such as the one which is manifested within the framework of the OAS (Organisation of American States), as well as the military provocations by the US and their allies, the open targeting by the US, NATO and the EU, alliances in which our country participates and fulfilling a negative role for the people.
Read more »
Posted by In Defense of Communism

Communist Party of Venezuela (PCV): Against fascism, class-appeasement and corruption! The option is Socialism! 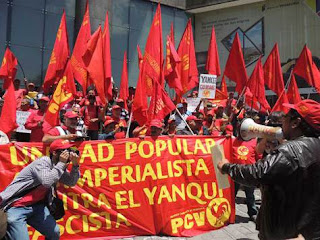 In a published statement the Communist Party of Venezuela (Partido Comunista de Venezuela) expresses its greetings to the workers of Venezuela and the world on the occassion of the International Workers Day.

Among other things, PCV's statement points out: "As it happens historically, the working class and peoples of the world bear on their shoulders the burden of the crisis of the capitalist system in its imperialist phase, while the governments of the hegemonic powers, mainly the United States and the European Union, continue their offensive against the people and national liberation processes. Monopoly capital and the governments and institutions seek to serve out of the crisis of the system with more violence and greater social injustice. The class contradictions have been sharpened in all over the  world, including particularly in Latin America".

The PCV accusses US Imperialism- as well as their collaborators in Latin American countries- for trying to restore the power of the monopolies, by supporting the implementation of neoliberal policies. For these plans, reformist petty-bourgeois parties have been a useful tool.
Read more »
Posted by In Defense of Communism

Communist Party of Venezuela / Source: Solidnet.
The Communist, Revolutionary and Workers Parties of the world, express our strong support and firm solidarity to the VENEZUELAN PEOPLE, the Government of the Constitutional President Nicolas Maduro Moros, the Communist Party of Venezuela, and the Committee of International Solidarity (COSI), member of the Executive Committee of the World Peace Council (WPC), victims of an abominable and new interventionist escalation by the US imperialism which means the prelude to a declaration of war.
The "Executive Order" was renewed on March 3rd, 2016 by the President of the United States, Barack Hussein Obama, which extends and expands the possible actions of the major State aggressor on sovereignty and self-determination of peoples, against the political and social process in Venezuela, in which a "national emergency" against an alleged "unusual and extraordinary threat to national security and foreign policy of the US" is declared.