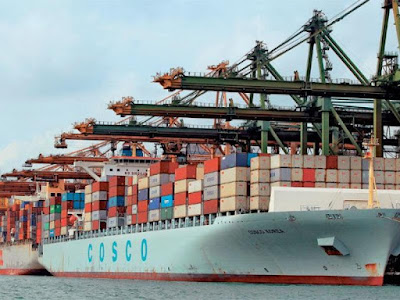 A 46-year-old dockworker was killed on Monday afternoon at pier 2 at the Piraeus Container Station, when, under unclear circumstances, he was fatally hit by a crane bridge.

"It's not the 'bad' moment. It is a result of the intensification of work, the lack of safety measures for our health and our integrity ", the Union of Container Workers at Piraeus Port underlines in its statement, demanding 6-hour shifts, abolition of counter shifts, conversion of all contracts into full and Health and Safety Committees by employees.

At the same time, the Union has declared a 24-hour strike as a response to the tragic event, 902 portal reported.

“The working class is mourning another dead man on the altar of profit, a young man who lost his life in a horrible way, this time at the "galley" of Cosco, in Piraeus Port”, points out the Communist Party of Greece (KKE).

The KKE statement adds: “This tragic event confirms the harsh reality for the dockworkers, with the crumpled labor rights, the intensification of labor, the absence of even fundamental safety and hygiene measures, which cannot be hidden behind the big words about investments and the transformation of Piraeus into an international freight hub”.

The KKE says that both the current government, as well as the previous ones, bear responsibility for the labor conditions in the port, because they strongly supported the Cosco investment and the transformation of the workplace into a labor ghetto.

“No more workers' blood for the profits of the bosses” stresses the All-Workers Militant Front (PAME) in its statement, denouncing the “new employer crime which could have been avoided, a crime for which the workers and the Union at the piers of Cosco had warned”.

“This labor hell, this modern Middle Ages in the ghetto of the company to which the governments handed over the entire port of Piraeus, proves once again that the profits, the investments and the development of business groups are watered with the workers' blood”.