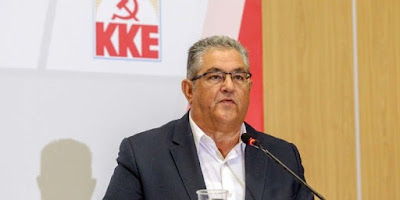 “The doctrine which says that if Greece is the good child of NATO, USA, EU will, supposedly, protect its sovereign rights has been completely, demonstrably and historically bankrupt” said the General Secretary of the CC of the KKE Dimitris Koutsoumbas during his speech at the Greek Parliament on Wednesday.

Speaking at the Parliament's Plenary regarding the voting rights of Greeks abroad, Koutsoumbas accussed both the New Democracy government, as well as the bourgeois parties of the opposition, that they are all committed to the doctrine of Greece's participation in the imperialist alliances of NATO and the EU. The KKE leader blamed the other political forces that pose a fake dilemma to the Greek people which is “either regression towards Turkey or conflict and military involvement”. This dilemma has been highlighted once again these days due to the “unacceptable agreement between Turkey and Libya”.

As the General Secretary of the Communist Party of Greece (KKE) pointed out, there are significant and rich hydrocarbon deposits, mainly of natural gas, in the region of the Aegean and Eastern Mediterranean. He added that these deposits consist a matter not only for the bourgeois classes of Greece, Turkey and other states of the region, but also an issue for big powers such as the USA, France, Britain, Italy, Germany, Russia, China, which want to have control over them.

“Our people must know that these intense competitions regarding who will seize the wealth of a whole region, lead with mathematical precision to armed conflicts. Such competitions are behind the long-standing imperialist interventions in the Middle East, in Northern Africa, in Libya”, the General Secretary of the KKE said.

Regarding the stance of the Communist Party, Dimitris Koutsoumbas stressed out: “Once again, the KKE has a clear position, addresses with responsibility the workers, the people, the youth as well as our people abroad: We reject the various fake dilemmas. There must be no regression whatsoever in Greece's sovereign rights on the part of the Greek government”.

He added: “Any negotiation, agreement and settlement with Turkey must be based on international law, maritime law and sovereign rights. Of course, developments show that you can't be friends with the imperialists. We believe that what can shake things up for good and illuminate another recourse, is the release from the deadly embrace with NATO. It is the struggle to close all US-NATO bases in our country, to pave the way for alternatives, in coordination with the people's movements of the region and the rest of the world, towards radical changes”.

Dimitris Koutsoumbas also underlined the position of the KKE is that the people of Greece, alongside with the people of Turkey and the region's people, must impose with their struggle the disengagement from imperialist organisations; this position is the most friendly one for our people and our countries.