30 years since the execution of Ceausescu — Who has benefited?

Thirty years have passed since the counterrevolutionary events in Romania and the execution of Nicolae Ceausescu and his wife, Elena. It was on December 25, 1989 when, after a hasty, parody trial before a Kangaroo court, the Ceausescu couple were executed in Targoviste, north of Bucharest.

According to the head of the firing squad, Nicolae Ceausescu sang "The Internationale" while being led up against the wall. The execution of Ceausescu marked the end of the counter-revolutionary overthrow of Socialism in Romania and the beginning of a “new order” in the country.


In 1989, Romania was the only Socialist country (except from Albania) which had no standing debts. That, because on March 1989 Romania had repaid all of her external debt which had been accumulated mainly in the 1970s. Romania had become debt-free and independent from Imperialism- that was Ceausescu's crime that the imperialists couldn't forgive. The western media, in collaboration with Romanian counter-revolutionaries and traitors, created the “monster” of “Securitate” (the notorious secret police of Romania). What has been said in the West about “Securitate” could definitely exist as an outrageous Hollywood movie scenario. 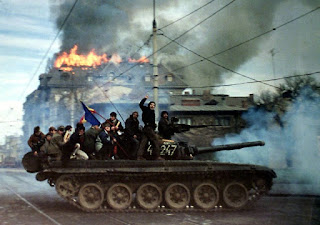 We could refer extensively to the imperialist-backed, counter-revolutionary plot which created the December 1989 events and the overthrow of Ceausescu. That could be the subject of a future article.

In the following lines, we present how romanian people perceive the living capitalist hell which was created after the overthrow of Socialism in Romania, as it is reflected in polls, articles and analysis of bourgeois sources. The people of Romania are still paying for Capitalism's restoration: rapid increase of public debt, high unemployment, extended privatizations, complete destruction of the welfare state, rise of poverty and homelesness, persecutions against communists, etc.

SOME FACTS ABOUT LIFE IN CAPITALIST ROMANIA

61% of Romanians express a positive view on Communism


The results of the above survey confirms a tendency that exists in Romania for more than a decade. In July 2010, a similar research conducted by the Romanian Institute of Evaluation and Strategy (Institutul Român pentru Evaluare şi Strategie —IRES) had shown that 63% of the Romanians regarded life under socialism (pre 1989) as better and a 43% of them would vote for Nicolae Ceausescu if he was a candidate in the elections.


* * *
Child poverty in Romania has worsened since EU accession