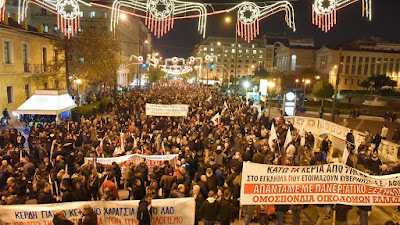 Under the slogan "No to the budget-guillotine! Struggle for the people's contemporary needs" thousands of workers, students and pensioners demonstrated in Athens and other Greek cities, expressing their opposition with the anti-people state budget submitted by the conservative New Democracy government.

After a call by the All-Workers Militant Front (PAME), the protesters gathered at Propylea and marched towards the Parliament where the debate on state budget will conclude tonight with a roll-call vote.

The rally was attended by members of the Communist Party's Central Committee headed by the General Secretary Dimitris Koutsoumbas who joined the demonstrators after his speech in the Parliament. In a statement to reporters Koutsoumbas pointed out the following:

"Alongside the fight we are giving in the Parliament against a new anti-people budget, we are also fighting in the streets of Athens, in the streets throughout Greece, in a struggle that must continue tomorrow and the during the next months because 2020 is going to be grim in all issues".

Earlier, during his speech in the Parliament, the KKE General Secretary condemned the governental policy, underlining that "the budget serves capitalist development and for that reason it is highly anti-popular". Dimitris Koutsoumbas also presented specific facts and data which expose the class nature of the budget in favor of  the capital and added that it brings new burdens for the people.

Similar demonstrations, organized by PAME and Trade Unions, took place in Thessaloniki and other big cities throughout the country.

IN DEFENSE OF COMMUNISM ©️